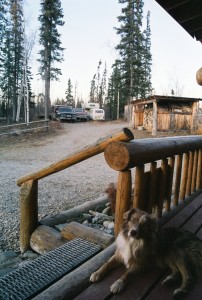 I have a whole different respect these days for the term wild, maybe it means the absence of domestication, maybe it’s a communion with the Earth that takes place under the lack of opposable thumbs, a void of human safety in utter completeness.  It’s a bit challenging to pin down exactly.  What was it that the first wolf abandoned when he came in to lye bye the fire of man, the great god who maketh the flames?  Whatever that was is what is here at the frigid ends of the Earth, the last and final frontier.  I woke up one morning in the political grey area, a strip of unowned, denationalized Earth that exists between the borders of Alaska and Canada, scraped the ice and snow from the outside of my windshield and climbed back inside.  Still rubbing the sand from my eyes with shivering hands as I scraped the ice from the inside of my window and started my behemoth VW engine I looked up to see a mama grizzly rising to her hind legs to bellow at me from no more than twenty feet from where I had been standing not more than three minutes ago.  They’re so cute and cuddly looking in the photos, but gosh they’re big and scary in real life.  Invading the wilderness, that’s the moment that I realized the tables were turned.  I found one of the last places where man has yet to get the upper hand.

It was a nice ride in search of the wild.  I drove out across the Mojave for the umpteenth time to Los Angeles, where I didn’t even stop, straight on to Santa Barbara and stayed with Pouli for a week, got lost in SanFrancisco for 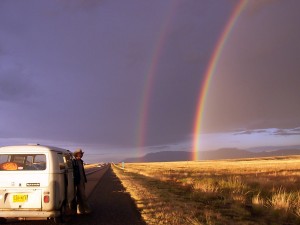 five hours in the middle of the night.  A nice leisurely drive up the Pacific coast through the redwood forests and through Oregon, Ashland, Eugene, Portland, a couple days in each.  I picked up a hitchhiker on my way up the Washington coast and ultimately found myself in Port Townsend on the far Northwest tip of the Continental US, Puget Sound, liked the guy, met a nice group of folks, made my first dollar playing guitar on the street, stayed for a week, camped in the forest, buy the time I left we had a crew of 6 or so, running two VW buses deep, even got kicked out of National Park and Pablo was arrested.  The bus and I took our first ferry ride out of Portownsend and up to Bellingham and hit the Canadian border where we were both interrogated and searched for three hours before they reluctantly “welcomed us to Canada.”  Fuckin’ hippies!

I sold my Martin in Vancouver, cried all night, stayed a few days and mossied on up to the Alaska highway, the Alcan, played in a bar for free beer at mile 0.  1200 miles of not a whole lot but the most beautiful country you ever did want to see.  I broke down at mile 101 and it piss poured rain for a week while I waited for parts. I was sick and it was cold and I was goddamn grouchy.  Broke down again at mile 144, but this time, felling better, I got a job as a lumberjack to pass the time and pay for the parts I had to wait another week for.  I stayed almost two weeks in Whitehorse, landed a couple jobs, but the Canadians didn’t feel like they wanted to give me a work permit right away so I had to kick out for Alaska, past the bison and caribou and moose.  I did work the two weeks I was there as a bouncer at the roughest bar in the Yukon territory, that was an experience.  Lil’ ol’ me, beard to my knees.

Anyway, I lined the sled dog gig up within’ a couple of days of limping both myself and my VW in Anchorage and here I shall stay until the weather comes around.  I’m pretty much an all ’round farmboy.  When I’m not looking 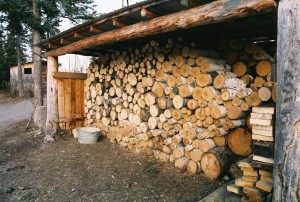 after the dogs I’m out cutting firewood, grooming trails, setting stuff on fire, you know.  Pablo has as much room to run about as he could ever dream of and is learning to pull a dog sled.  I get a lot of quiet time to do what I like in the evening, mostly read and play the guitar.  I’ve been really into Edward Abbey and Jack London, read two books from each since I’ve been here.  It’s been snowing for three days straight.

I’ll try and fill in the details in a nonchronological manner as they come to my mind, but that’s the long and the short of it and some content to get this blog running.