Also check out my photos from Cordova.

Even though I haven’t been able to determine whether the small town of Cordova, Alaska really wants to have its song sung or not, I’d thought I’d chime in anyway as I’ve had quite a few firsts here. Just yesterday I was 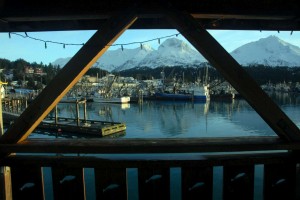 sitting at the kitchen table over looking the lake and saw for the first time a plane take off on skis, on the lake. I was exuberant. And then just as I started writing this article I looked over to see a (river?) otter wandering across the ice to find a quick hole in which to take a bath. I let Pablo out to chase it for his morning exercise. This is the first time that I recall spending any amount of time in a town that literally has no road, not even a foot path. We took a ferry for 12 hours out of Whittier that connects Cordova to the main stay of Alaska’s populous. That’s not to say that there a no roads here, just no roads leading out of here. I saw a Porcupine in a pine tree, a dozen bald eagles soaring about the coast, walked on a glacier and traversed a mile and a half across an 800-foot deep lake by means of its Ice cover, but aside from the wilderness it is perhaps the involvement of the community and its forward thinking nature that make it most interesting.

One of the most fascinating examples or this nature that I wanted to touch on was the Cordova Electric Cooperative. First of all, it is indeed a cooperative under the same principle as your local food coop and it is effectively member owned. Furthermore, Cordova is in no way tied to Alaska’s main power grid as are many of the state’s rural communities. The part that I find quite interesting is that at some point this area diverged from the status quo and took on their power generation needs as a community instead of having them dictated by their municipality. From the CEC website: “Originally the municipality of Cordova provided electric energy to the community. In 1978 the citizens of Cordova organized and

voted to form a rural electric cooperative. These visionary citizens named the utility Cordova Electric Cooperative, Inc. and assumed member ownership and stewardship of the Cooperative.” Now I’ve never heard of (though I’m sure it has happened more than once) a community voting to disband its power company in favor of an electric cooperative, but that is what happened here and over the last thirty years it has grown into a model of what it possible in meeting rural energy needs. As it stands now the Cordova Electric Cooperative has implemented two hydroelectric plants at Humpback Creek and Power Creek generating 1.5 and 6 megawatts of electricity respectively. These two plants now account for roughly 30% of the town’s total usage. This is also in large part due to Clay Koplin’s campaign to not only reduce light pollution but conserve power by using directional LED streetlights in addition to a large scale, city wide switchover to fluorescent lighting, thus reducing the cities carbon footprint and dependence on diesel generators even further. I’m hoping to have the chance to interview Clay and possibly visit one of the hydro plants before I depart and find out exactly how all of this came to be, but just the results themselves are, in my opinion, a fine testament to consciousness and clairvoyance of the community at large.

Now, getting back to the disconnect that is having no road. If you think about it, that means that absolutely everything here that supports a Winter population of about 1500 and a Summer population 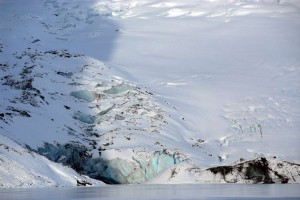 around 2500 arrives across the Prince William Sound by boat, houses, cars, food, building supplies, petrol, desks for the school, pencils, absolutely everything. It’s no wonder you can’t get a container of Hummus for less than five bucks, but that’s half the romance of it. There are two ports that run ferries to Cordova, Valdez (sight of the 1989 Exxon Valdez oil spill) and Whittier. It’s about $150 to bring your car on the ferry and around $90 to bring just your person, which puts regular runs to town for supplies just out of reach. Once you are here stays are usually extended, mine will be just about a month, but if you like the outdoors there is plenty here to suit your fancy. If you leave town in any direction you are in the wilderness or at sea. There are numerous mountains for climbing or skiing, heliskiing, trails for hiking, lakes for ice skating and four large 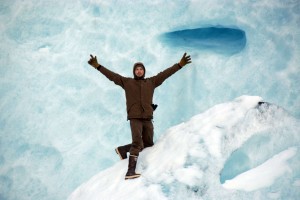 glaciers within hiking distance. We made the 11.5 mile round trip hike to Saddle Bag Glacier two days ago and I must say, glaciers are really, really cool. Just below the Glacier is a lake 800 feet deep and approximately 1.5 miles across, frozen solid. From the far side of the lake the glacier looks unimpressive at best compared to the mountain scenery that completely surrounds it, but as you can see from the photo to your left it’s actually quite large, magnificent. If you take a moment to imagine the scenery that would be necessary to make the glacier in the photo look small and inconsequential you can also imagine what it does to ones sense of self, significance. Even with the six mile hike back to the car in mind we gathered up a few broken chunks of glacial ice adding another 10 lbs to our already heavily laden packs and schlepped them home. I don’t think I’ll ever outgrow the novelty of having 10,000 year-old bubbles bubbling out of the ice in my 12 year-old scotch. Most tasty and a perfect means to get even with the glacier for making me look so insignificant earlier in the day. Who’s tiny now?