While a lot of work and excitement certain parts of life on a salmon tender do tend to become monotonous.  Tying the boat up to the dock is one of them.  If you read Fishing in Alaska – Life on a Salmon Tender part 2 you’ll know that arriving at the dock at 4am I was only on 45 minutes sleep.  It’s a whole new ballpark of tired I can’t begin to know how to explain to you.  The routines is the same though, five minutes out of bed and I am standing on the stern of the boat, my eyes still sandy, coiling the lines to throw to the dock and tie up.  Everything seems normal. 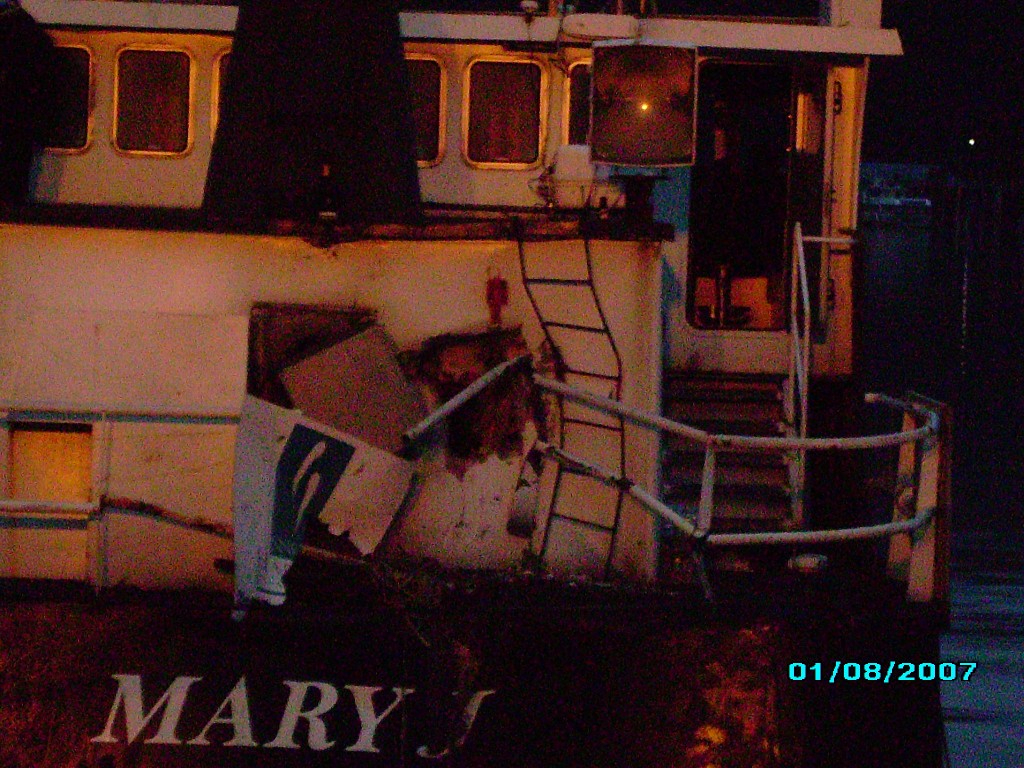 When your body is that run down you tend to grow accustomed to not using all of your available senses, especially when you first awake.  It had been about 75 mornings in a row tying up on little or no sleep.  My queue that we were approaching the dock had become the engines throttling down.  It singled that we were close and would need to throw lines soon, be ready.  On this particular morning the engines never throttled down.  I looked up from my line coiling curious what was taking so long and saw the dock about 30 feet away and coming at me full steam.  Mind you we’re on no small boat.  The salmon tender was 110’ long, about 300 tons and doing 10 knots.  It didn’t stop on a dime.  On this morning it didn’t stop at all.

That last 30’ between us and the dock might have taken all of 10 or 15 seconds.  I really don’t know it could have been an hour as time instantly transitioned to slow motion for the duration of the event.  What I do remember very clearly was having a conversation with myself that was much like reading a flow chart.  It started:  Can you make it to the wheelhouse (where you drive the boat from) before Impact?  No.  Are you in the best, safest place for a boat crash?  No.  I’m standing next to the railing and I’ll probably be launched over board.  Where is the safest place during a boat crash?  Don’t know, first time on a boat.  You had better pick a place that’s better than this one real soon.  Middle of the boat sounds safer than here and it’s easy to get to, sold. 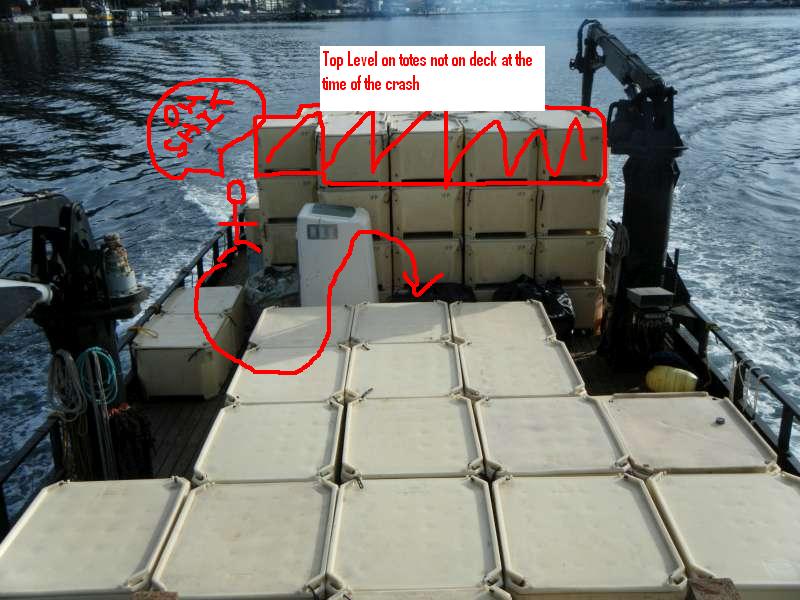 I made it to the middle of the boat and crouched down behind a tote just in time for the crash.  And crash we did.  A horrendous crash, we hit the dock, a retrofitted army barge, at full steam.  After the impact I looked up in time to see all of the shrapnel flying just after we bounced off of it engines still running full bore.  What was even more worrisome was over the bow, through the flying debris, I could see that we were headed straight for the back of another boat that was tied to the dock in front of our intended parking space.  No time to make the wheelhouse again and not slowing down I resumed my crouching position behind the totes and braced for another collision.

This blow was worse than the first and again I looked up to survey the situation.  Out of the corner of my eye I caught the other boat’s lines flying through the air.  The force of the impact snapped both 3” lines securing the boat to the dock and sent it sailing towards the harbor.  Our engines finally throttled down and it was over.  For us anyway, the other boat was still in motion drifting into the harbor. 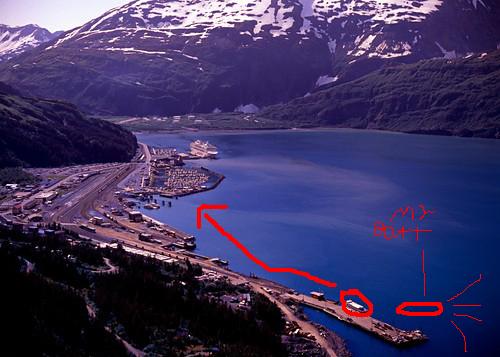 The first question that anybody wants answered is what happened in the wheelhouse?  I don’t know.  I wasn’t up there.  I will say this.  The coast guard did a full blood analysis on the captain and he was not under the influence of anything he shouldn’t have been.  There are a lot of long days out there on the water and sooner or later they catch up with you I suppose.

The miracle of the whole ordeal is that no one was killed.  The crew of the boat that we crashed into was asleep in their stateroom, two bunks on either side of the room.  Our anchor passed through the middle of their stateroom between their bunks and through the next wall into their galley kitchen.  Two feet either way and someone would have lost their life.

If you’re out there reading this and thinking of heading to Alaska to work on a fishing boat pay heed to this story.  Life is short and fishing is dangerous business.  This is an extreme case, but every day on the water you’re putting you life and well being at risk.  Looking around after this crash I was surprised, amazed and utterly thankful to not be seriously injured or worse. 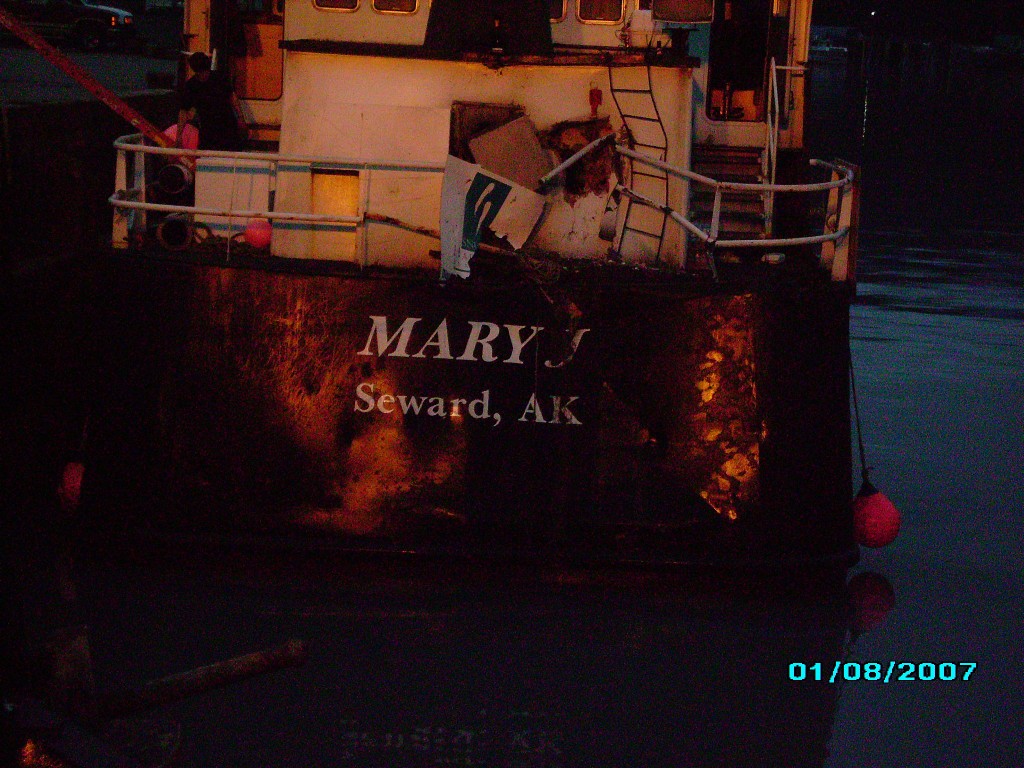