I searched the interwebs extensively prior to arriving in Alaska.  My search turned up nothing that even remotely covered the ins and outs of Salmon fishing, what to expect, what to prepare for and some basic vocabulary that will keep you from sounding like a greenhorn (rookie).  That’s what I’m going to cover here as well as what jobs are out there, thoughts on how to get them and other useful information that just might keep you from looking at your empty wallet come the end of fishing season wondering just how it is that your going to get home before winter, busted.

Every spring flocks of guys (and gals) make their way to the North Country with bright eyes and dreams of making it big on the fishing boats of Alaska.  The reality is that half of those guys have to borrow money from their friends or family to take their wet, tired eyes home.  In the middle are the ones that make enough to get home and little or nothing more.  To the right of center are the ones that make a decent wage and of course, there are the handful who make the big payday.  Note that the big payday is usually reserved for the fisherman who does this for a living and only rarely will a greenhorn luck into such a gig.  So let’s concentrate on getting on making a decent living for the summer and not going home broke.

Before moving on to the jobs that exist in the salmon fishery, let’s get to know a little about salmon.  You know the fish we’re going to try and catch.  In Alaska you’re going to deal with all five species of pacific salmon, from the extra tasty to the holy hell I can’t believe I used to eat that crap.

Largest of the five species, chinook average 15-20 pounds, but can weigh over 100 pounds. This species matures in 3 to 6 years. Major stocks originate in large rivers, such as the Columbia. Juveniles may migrate directly to the sea or rear for up to a year in freshwater.

A moderate sized species, coho average eight pounds, but can weigh over 30 pounds. Coho rear from 1 to 2 years in freshwater and mature in the fall of the second year at sea. Usually found in shorter coastal rivers.

A smaller species, averaging about six pounds, sockeye typically rear for 1 or 2 years in lakes prior to migrating to sea. The fish mature after 2 or 3 years at sea.

The smallest and most abundant species, pink salmon average three to five pounds. This species matures in 2 years. The juveniles migrate directly to estuaries without rearing in freshwater.

Now that we know what we’re after the next logical piece of information we need to understand is what boats are involved in salmon fishing and the job possibilities that go with them.

Set Netting ­- Set netters do the least volume of salmon and probably have the easiest, most relaxing gig in the salmon fishery.  Set netters use a skiff (all small motor boats are all generally referred to as skiffs) from which they set nets between their camp on shore and the water.  They usually have a nice camp or a small cabin in remote regions and spend at least as much time on land as they do in the skiff.  While jobs are hard to find as they are usually family affairs it’s as much a summer wilderness camp as it is a fishing job.  Pay is crew share based, a percentage of the catch. 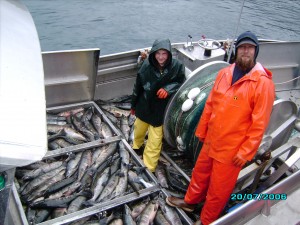 Drift Netting – The drift net boats are also known as bow pickers, longer and much more powerful than a skiff.  Drift netters set their nets from the bow of the boat and let them drift in the water.  A hydraulic real pulls the net back onto a spool on the bow of the boat while the fisherman pick the salmon and toss them to the fish holds.  Bow pickers usually run a 1-2 man crew and rarely hire deck hands except during pink season when their hands get tired of picking the nets due to the sheer volume.  However, some of the old timers will hire deckhands for the term of salmon season.  A season long deckhand gig on a good bow picker can be a very decent paying gig.  Accommodations are minimal with the all persons on the boat sharing a 6’x6’ or so living space with no showers or privacy. 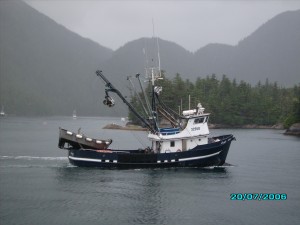 Seiner – The biggest (and possibly the most lucrative) fishing boat in the fleet.   Seiners have the biggest nets, catch the most fish and make the most money when the fishing is good.  Crew shares can range from 7-10 percent depending on your experience and even the low end can bring in 25K on a good year.  And remember, seiners make most of their money on pink salmon, which only run strong every other year.  2010 was a record year for pink salmon and even the new guys with a spot on a decent boat made well of 20K, 40 or more on a good boat.  This wont be the case next year, but it’s possible again come 2012.  A spot on a seiner isn’t easy to find for a new guy, but it is possible.  Just remember, you do only get a percentage and on a bad year that might not be very much. 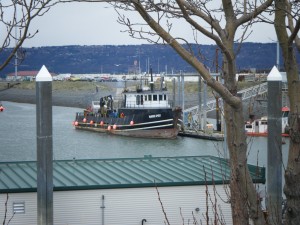 Tender – A tender boat buys fish on behalf of a cannery directly from the fisherman on the water.  Some tender boats may do some preprocessing but most do not.  You simply tie up the fish boats, weigh and unload the fish, pack them in the hold (or totes) and take them to port.  These boats pay a salary, every week, guaranteed.  You get paid by the day, usually in the $125-$200 a day range.  The work season is longer on a tender boat as you have to be there for the first Red Salmon that comes out until the last Silver Salmon in the fall, usually 110-120 days.  You do the math.  That’s pretty good for a summer’s work and there’s no crap shoot with crew shares.  You will likely get a bonus for staying the whole season to boot.  This is also an easy job for a greenhorn to pick up.

These are the jobs on the water, how do you find one, get one?

So where does one find these jobs?  Well, in Alaska.  No, I’m not being a smart ass.  If you think you’re going to find one sitting behind your computer dreaming from the lower 48, you’re wrong.  I found my tender boat job scribbled on a piece of paper from a fisherman in a port town with no road.  You’ll probably find yours in a similar way.  Walking the docks is always an option, but it’s going to be you and every other Joe.  Be sure to check the harbor masters office, the library, the post office, the local grocery and stray pieces of paper hanging out on any copy machines you see along the way.  You can always post your availability in these places as well.  The most important thing is to talk to people, all people, sometimes it’s easy to mistake a successful fisherman you should be talking to for a hobo.  It’s most likely you’re going to find your gig in a social situation, so talk, talk, talk.  Of course, you need to get to Alaska first.

So you actually get hooked up with a phone number or are going to meet a skipper, congratulations.  First, skippers don’t want to see cowboy boots or suitcases.  Get your act together.  If you come to the point where you’re meeting face to face for a fish boat job you should have at least this minimum gear in order:

Xtratuffs – Rubber boots worn by fisherman and residents of Alaska.  They’re going to set you back about $100 and it will be the best spent $100 of your boating life.  These are what you need to have on your feet when you meet the skipper.

Grundens ­– Rain gear, slicks, you’re going to be covered in rubber head to toe and these are the best ones to have, figure another bill here.

Socks – Cotton, I’d recommend at least 40 pair as a good starting point.  You won’t be upset if you have more especially if your boat does not have a washing machine.

Commercial Fishing Permit – Yep, that’s going to set you back another $200 for a non resident.

No Obligations ­– If you can hop on the boat in an hour that’s going to make you instantaneously valueable.

If you have all this in order when you meet the skipper your chances will improve greatly.  And don’t be a tough guy.  The last thing anybody wants to live with on a boat is a tough guy.

Don’t worry, there is one more thing you can do for salmon season, work at the cannery.  It’s not a lot of fun.  It’s all guts and no glory.  It’s pretty nasty even, but it will get you home.  Look up the canneries in the phone book and walk on in.  They’ll probably give you a job.