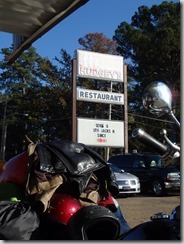 You know what’s going on in downtown Jackson Mississippi on a Sunday afternoon?  Not a damn thing.  The place looks like a ghost town.  We got off in downtown Jackson hoping to find a little hole in the wall BBQ joint or something to satisfy the soul after a few days on the road camping, sleeping in a tent and living off of a one burner Coleman camp stove.  It’s no easy feat piloting a motorbike with a passenger and 80 pounds worth of gear around unfamiliar downtown anywhere.  I can’t even begin to convey the frustration of riding around for 45 minutes with a grumbling belly finding no sign of food and hardly any of civilization, especially after singing “We’re going to Jackson” to myself for the last few hours cruising down the road.

Finally, we give up, hop back on 55 South and head out of town.  There’s not much between towns in Louisiana and I pull off in South Jackson to grab some gas.  In a last ditch effort I ask the cashier hey, is there anywhere good to eat around here?  She says “You like soul food?”  I say heck yeah and she points me towards Hudgey’s.  “That’s where I’m going as soon as I get off.”  I was wondering where everyone in Jackson, Mississippi was on a Sunday Afternoon.  They were at Hudgey’s.

Now this place is an experience, buffet style.  Crispy skinned fried chicken, mashed potatoes and gravy that would give grandma a run for her money, ribs so tender it’s work getting them from the pan to the plate, BBQ sauce that I just don’t have words for – baked catfish, fried catfish, mac and cheese, cornbread stuffing, coconut cream pie and so much more.  Soul food.

Of the probably 75 people that came wandering into Hudgey’s during our stay we were the only white folks around and probably the only ones not dressed in fresh church clothes.  Beyond the amazing food to satisfy the appetites of a couple wary travelers it was the spirit of the place that really warmed us.  The deep belly laughs, the endless carrying on and the big smiles make the place what it is as much as the food.

If you’re ever in South Jackson, Mississippi… this is one place you don’t want to miss.