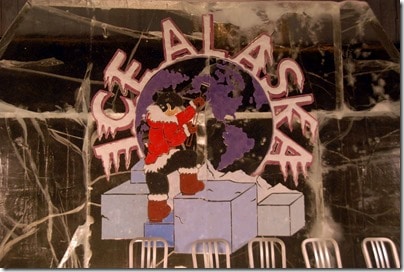 The World Ice Art Championships at Ice Alaska is probably the single coolest thing that I’ve seen in Fairbanks this winter.  Ice sculpting underwent a renaissance in interior Alaska in 1988 when organizers decided to revive the spirit of the 1930’s winter carnivals by flying in ice sculptors in from around the world for an event to be known as Ice Alaska.  Believe it or not, for that first exhibition and many years to follow Alaska actually trucked in ice purchased from a company in Seattle, all the way to Fairbanks.  Laughable you might say, and so does everyone else.  Apparently, the processes of harvesting ice had been lost to the years with the coming of modern refrigeration and there was no other way to immediately guarantee the quality of the ice, which was of great concern after the considerable expense of flying sculptors to Fairbanks for the event.  As it were, 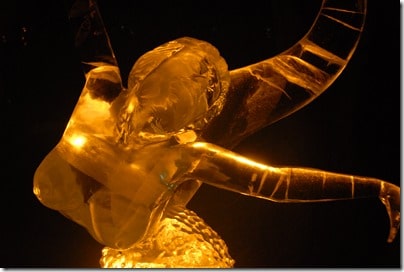 that first event went off without a hitch and somehow Ice Alaska became renowned for the quality of its ice.  As the story goes, the first sculptures of the 1988 event were shown samples of Fairbanks’ natural ice to the tune of raving reviews.  The rest is history.

Here we are in 2010 and the World Ice Art Championships have been held in Fairbanks at Ice Alaska for the past 21 years.  The event has become the end all be all of ice carving the world over.  I say congratulation to those organizers who sat around some cold little cabin in 1988 and forwarded the revival of Alaskan ice sculpting.  This year more than 1,500 tons of ice will be harvested from O’Grady pond adjacent to 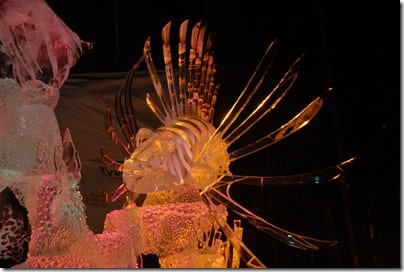 the Ice Park arena in Fairbanks to produce some 100+ sculptures from 70 teams representing nearly a dozen countries.  The ice itself has earned the nickname “The Arctic Diamond” and has been exported to countries as far away as Israel. The ice harvest is an event in itself and didn’t ultimately come to fruition until 1998.  The ice harvesting crews are constructed entirely of volunteers and have been since that time.  It is a process unique to Fairbanks and is one that experiences constant evolution.  Today, the ice is cut from the lake with a custom built chainsaw apparatus with bars as long as 60” in length and moved from O’Grady pond to the Ice Park Arena with extendable boom fork lifts.

Here is some more information on the ice harvest..

The competition itself is split into two categories.  There is the single block competition where sculptors are provided just one 3’×5’×8′ (90 cm × 150 cm × 200 cm) block of ice weighing in at almost 8,000 pounds from which to create their sculpture.  Teams are limited to two persons.  In the multi block competition each team of up to four persons receives 10 blocks approximately 6’×4’×3′ (180 cm × 100 cm × 90 cm) and weighing in at over 4,000 lbs each.  Power tools are permitted across both events, but the use of heavy machinery is only permitted in the multi block event.

I’m looking forward to seeing who the winners are, but without further adieu – Enjoy the show!