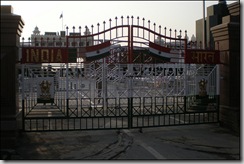 I’ve long since had a fascination with politics on the Indian sub continent.  My first trip to the region was in ‘01.  I remember the date more so because my passport is coming up for renewal next month and India was my first trip out of the good ol’ US of A.  It launched a course of personal study that would have notable implications in my life.  It left its giant mark on my fragile, eggshell mind and changed my view of the world in a way that can never be undone.  But this post is not going to be a philosophical rant about Asia, I promise.  It is going to be a story that I was reminded of yesterday that is so glorious it would be a shame not to have it one the permanent record.  The events described here actually happened on a subsequent trip to India and later Pakistan, back to India.

I was traveling with a large German fella who was originally from Kirgizstan.  He grew up in Germany, spoke Russian, German, Spanish and English.  He was every bit of 6’ 4” sporting a Giant beard that we had both made a pact to grow when leaving Nepal and pledged to keep until leaving Pakistan.  We traveled together through three countries.  Jacob had one peculiarity that set him apart from the pack in a very serious way.  The slightest mention of God, Jesus or Christianity to him and he would burst into a tirade as if the person who had uttered such words had busted his very own mother in the lip.  It never mattered the company, the climate or the context, he just went wild.  He was like an irate professional wrestler.  I remember talking him down in the middle of a New Delhi bazaar one night.  A dozen people watched while he towered over some poor Indian missionary kid that tried to convert him to Christianity, giving him the 400 decibel low down on the fallacy of religion.  But that’s neither here nor there. 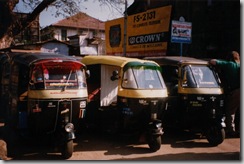 Jacob and I spent two very interesting weeks in Pakistan and had just walked back across the border into India.  It’s 20 or 30 kilometers from the actual border crossing to our destination for the day, Amritsar, and the free lodging at the Golden Temple.  The first thing we do is look around for the gaggle of rickshaws that are never too far off.  All hanging around in their little gang smoking bidis and looking supper interested in us while putting on a noticeably aloof farce.  Well traveled in the region we approach them confidently and the bargaining commences.  We usually had pretty good luck bringing the price down to about half of the original asking price and still more than the local price, but this time it just didn’t work out.  The gang stuck together and stood their ground.  They offered us a price no less than three to four times the going local rate.  Our outrage became apparent and the tone of the otherwise ritualistic practice became heated.  By the time we walked away from the gang with no ride we had amassed a following of onlookers.

Jacob and I decided that we weren’t going to be had and opted to hitchhike our way to Amritsar.  By this time a quarter of the village had lined the streets to see what all the commotion with the tourists was about.  And here we were trying to hitch a ride out of there on anything that moved.  We took the first 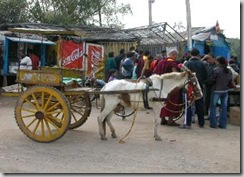 ride that we were offered.  It was a donkey cart full of onions.  We found a cozy spot, tossed our bags aboard and we were off, albeit at less than walking speed.  Before it settled in exactly what we were doing the sound of cheering and applause interrupted our conversation.  By this point the majority of the village had lined the street to see what the two white folks that had had and altercation with the rickshaw clan and hitched a ride on a donkey cart were up to.  It was as if we were the center float in a parade.  We began to shyly wave back and enjoy our small moment of Indian notoriety.  I think the people of the town were behind us in not giving in to the rickshaw gang.  For it they got a once in a once in a lifetime spectacle, for us, about the same.   It was one of those moments in life where you naturally stand your ground and the next thing you know everyone is there to congratulate you.

Once we hit the other end town and the commotion died down one of the rickshaws pulled along side and offered us the ride at a reasonable rate.

And a good time was had by all.