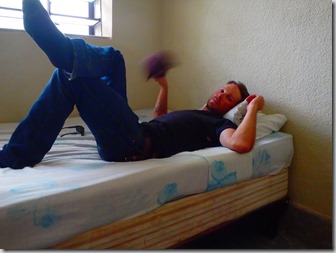 There are many variables in finding cheap accommodations in Mexico.  Now that we’ve traveled the length of the country I think we’ve amassed enough information to give you a run down of what to expect.  Prices change from town to town and so does value for your money.  For instance, tonight we’re in a hotel in Valladolid for 240 pesos that is as basic as it comes, no TV, heat, or air conditioning.  There’s not even a toilet seat.  The bed has seen better days, but hey, we’re in tourist town.  A few weeks ago, when we came down with a case of 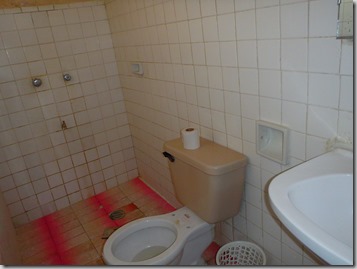 Montezuma’s revenge we spent a few nights in a hotel in Matehuala.  For 200 pesos we had a brand new king size bed, television with cable, Internet access in the room and secure parking.  What’s the difference?  Tourists don’t go to Matehuala.  It’s not on the Yucatan Peninsula surrounded by Mayan ruins, cenotes and Caribbean beaches.

We’ve seen rooms as cheap as 140 pesos, but even our low standards led us elsewhere.  That particular room was very small and coved in black mold floor to ceiling.  There’s no upper end either.  You can spend a small fortune on a room here if that’s what you want to do.  You’ll probably get what you pay for.  Mexico does seem to have a very high standard of service, if you’re willing to pay for it.  I would say our average across the board thus far is is probably about 230 pesos a night.  At today’s exchange rate that US $17.69.  Keep in mind that we usually pay the double price as there are two of us and we frequently bargain down rates by a few dollars here and there.  I’m going to average it out to set some basic expectations.

Bottom of the barrel.  You’ll most likely get a private bath.  I wouldn’t expect a toilet seat.  You’re probably not going to get a TV.  You’re definitely not going to get AC/Heat, hot water, and the toilet may not flush.  The florescent light bulbs will be exposed, parking will be on the street and the place will probably sketch you out a little.  It will likely have a fan that is still marginally attached to the ceiling and at least one small window.  We have stayed in a few places that were in the upper end of this range and never felt unsafe.  Though in one, the hotel manager advised us to only walk one direction out of the hotel, never the other.

Things start to improve.  You’re likely to get gated parking in this range.  You’ll probably have a television with cable unless you’re in a spendy tourist region.  You’re crossing the toilet seat divide, from about the middle of this range it’s toilet seats for everyone from here on out.  You’re likely to get a towel big enough to wrap around your body.  The florescent bulbs will still be exposed, but there will probably be more than one so you don’t have to look directly at them.  You’re starting into the furniture range.  You’ll begin to see amenities such as a desk and perhaps even a chair.  Internet in the lobby is probable.

Add an upgraded towel, internet access in your room and probably a soft chair to sit in.  The bed might still be small, but it is comfortable with a relatively new mattress.  You’ve definitely got secure parking now and maybe even room service.  You’re starting into the range where hotels have onsite kitchens.  Coffee in the morning just might be a possibility.  Don’t get too excited, It’s probably sill Nescafe.

Now we’re talkin’ big, fluffy towels, flat screen TVs, private security guards and swimming pools.  You can now expect a comfortable lobby with some amenities, maybe computers you can use, couches and or cozy chairs.  They’ll have other special things, a deck, a nice courtyard, maybe a play ground.  If it’s just the two of you you’re in a comfortable queen or king size bed.  You’ve got night stands and a proper desk.  It might even be quality furniture.  The room is still rather small, but it’s nice, fresh and in a good neighborhood.  You’ve got AC if you need it.

The rooms get bigger, amenities stay about the same.  You should definitely be able to get proper coffee on site.  I’m sure they’ll be happy to see that you get whatever you need, at a price.  Service is fantastic from here on out.

I can’t say what happens from here.  I’m sure it’s beautiful.  For a little perspective, you’d be hard pressed to find a Super 8 in the states under $40.  The difference here is that you really have to look.  Hotels aren’t as apparent here as they are in the states.  The sign for the hotel we’re in tonight was little more that 2’X2’.  We seem to find the best deals a few blocks off of the main plaza (centro).  Sometimes you’d never think a building was a hotel.  Alas, it’s the best deal in town.  One thing that does seem to hold true is that the bigger the population center, the more value you get for your dollar.  However, they are inevitably harder to find.

Get your self a copy of Sjoerd Bakker’s Economical Hotels of Mexico and Central America.