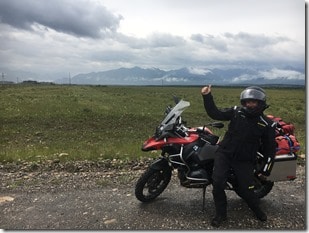 Some things in life just shouldn’t be missed.  The exit for 93 North off of the Trans-Canada Highway is one of those things.  Also known as the Icefields Parkway, this fantastic road winds almost 150 miles along the Continental Divide through the Northern Rockies from Lake Louise to Jasper.  She climbs mountains, meanders through vast sweeping valleys and bisects icefields.  It’s every motorcyclists dream come true times two.

We waited out the rain for a day in Calgary in order to run the Icefields on a mostly sunny mid 70’s afternoon.  It was well worth the wait.

I’ll let the photos do the talking on this one.  Enjoy…

Lake Louise.  All the rivers and lakes on the parkway have a turquoise hue from glacial runoff.  We almost got frustrated in the stop and go traffic going up a mountain side and skipped this one.  I’m glad we didn’t.  Our clutches not so much.

We found this sweet spot on the Bow River by accident.  I was expecting a a little off roading, but it turned out my dirt road wasn’t much more than a parking spot with an obscure trailhead.  A brief hike brought us to this horseshoe in the river.  It also made the perfect spot to shed some layers from the cool morning air.  And the best part?  Not another tourist in sight! 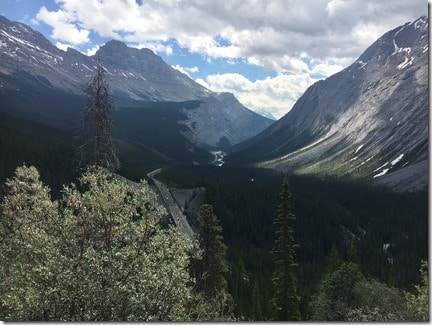 Yep, that’s the road way down there.  Over the course of the morning we had passed this older gentlemen on a KLR 650 several times.  He had that little bike loaded to the hilt with camping gear (it hasn’t been to common to see people both motorcycling and camping on this trip) putting up the hills at 30 or 40 MPH.  We finally wound up getting a chance to talk with him at the top of this pass.  He’s 60 years old and doing his second round trip to Alaska.  He was a riot and cussed like a sailor the whole time we were talking with him.  I told Steve that I want to be that guy when I grow up.

I caught this little gem out of the corner of my eye rolling down the road.  I’m always checking out the river, which had been tame for most of the ride.  When what did I spy off in the distance but a serious looking horizon line.  That horizon line led us to Mistaya Canyon.  ‘Mistaya’ means ‘grizzly bear’ in the language of the Cree Indians.  ‘Horizon Line’ means ‘fun imminent’ in the language of the Dirt Bags. 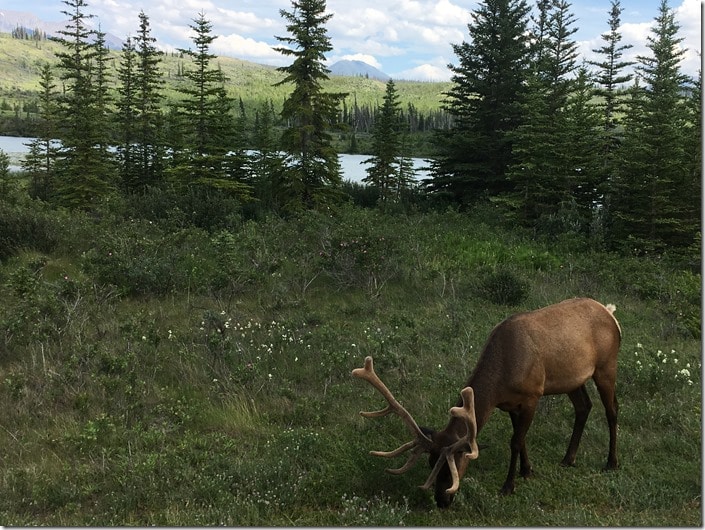