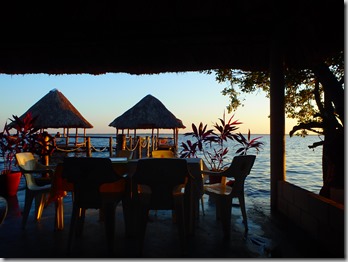 Seriously Mexico, potholes 5 or 6 feet long,  8 or 10 inches deep and 3 feet wide on a toll road ? I think you’re missing an ingredient or two in your asphalt.  It looks brand new and has giant craters in it big enough to totally screw up my day.  Did you just pave over an existing pothole in the old road thinking the outcome would be somehow different?  The last thing you want to see when your ripping down the freeway at 65 mph is a coffin sized hole.  They were so bad at one point today that we were doing 15 mph on a four lane freeway that we paid to drive on.  I always thought potholes we the result of water seeping into the cracks in the road and then freezing.  We’re in Tabasco, Mexico.  It doesn’t even snow here.

If it’s not the potholes it’s the topes (speed bumps).  I’m getting the hang of this one.  I 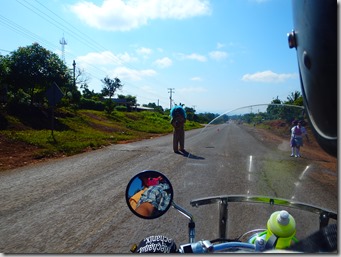 know when I’m going to bottom out, there’s a glistening sheen of smashed car parts on the far side of the tope.  It’s a dead giveaway.  You’d think after years and years of people smashing the underside of their cars into small, shiny bits on the road that maybe somebody would say:  “Hey, you think that tope is a little to tall?” and maybe fix it.  Nope.  They open a mechanic shop 50 meters down the road.  I get through most of them unscathed, but every once in a while I nail the bottom of the bike.  It’s just like the potholes, you can dodge a thousand of them, but sooner or later – wham!  We’re all between potholes and topes. 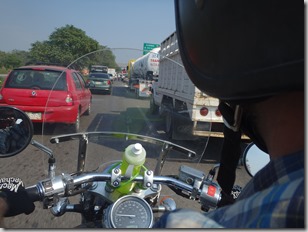 I could live without the potholes and topes, but I’m actually getting the hang of driving a motorcycle in Mexico.  The basic rules of the road for motorcycles are:  If it’ll fit, get on with it.  I like these rules.  All the things that you wish you could do on a motorcycle at home, you can do here.  In fact, people expect you to do them and that in and of itself makes it safer to do them.  See the photo (above left)?  That’s a lane for sure.  You could fit motorcycles down that three wide.  At one point today Keli asked me:  Do you think we could pretend we’re a car for a little while?  In other words, stop nearly missing semi trucks while weaving in and out of a traffic jam for a minute. 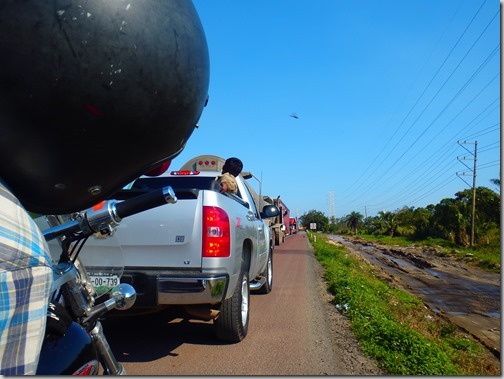 I’m three inches shy of that being a lane. 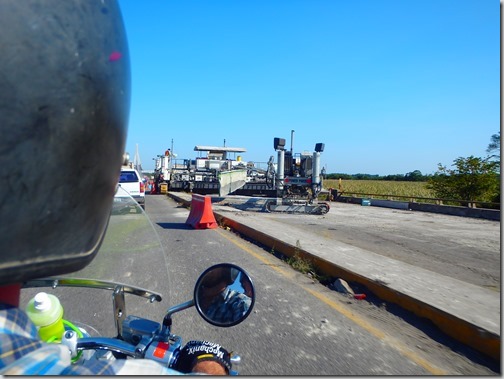 I’m two days too early for that to be a lane. 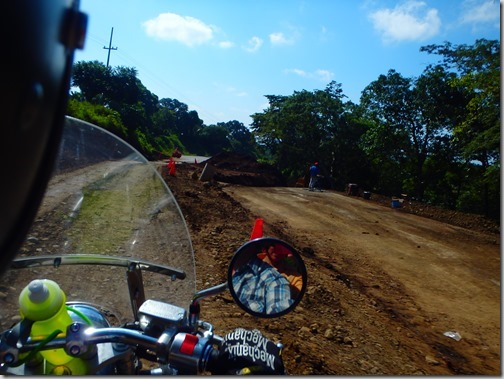 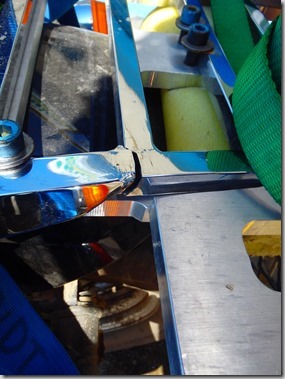 All that bobbing and weaving and pothole dodging and smashing and tope scraping and swerving left us with a busted rack.  They (the topes) literally broke the metal at the welds.  It might have had something to do with the 90lbs of gear piled on there, but I blame the topes.  If fact, I blame topes for just about everything these days.  They are my universal scape goat.  For everything wrong in the universe there is a tope to blame.  The busted rack is our problem at the moment.  After trying to put it back together with hose clamps it just wasn’t giving me the warm fuzzies.  Fortunately, Lorenzo, the owner of the cell phone shop that we had been working on the bike in front of had been watching the whole thing and spoke some English as well.  I explained to him using a bunch of hand signals and the words “metal-gun-fire” that I needed  a welder.   Graciously, he hoped on his four wheeler, led me to the welder and translated what I needed done.

The welder / mechanic turned out to be a great experience.  Of course, I attract the attention of the neighborhood and all of the guys come over and take turns taking photos on the bike while my team of mechanic removed, disassembled, welded the break and added additional supports.  After the guys finished their photo shoot they went and got the girls who wanted kisses.  I obliged and kissed them on the cheek and they proceeded to run away giggling.  A good time was had by all. 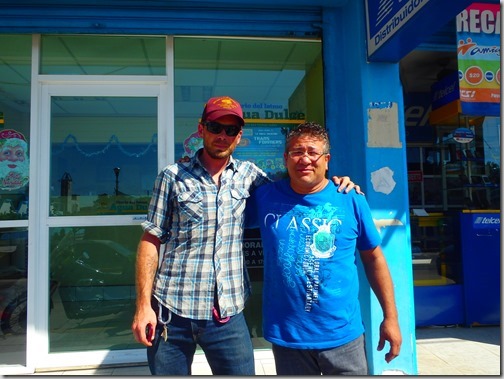 Lorenzo if you get to read this know that we are truly thankful for your help and kindness.  It’s people like you that make doing this kind of thing possible, that let us take all the hardships in stride.