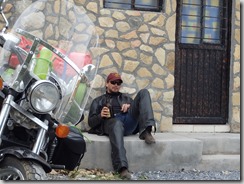 Whooped.  We’re pulled into a roadside hotel in San Rafael, Mexico, about 300 miles from the border at Eagle Pass / Piedras Negras.  It’s the end of day two South of the border and it’s been the coldest two days riding we’ve seen this far.  I thought it was supposed to get warmer as you head South.  We’ve come 2300 miles and it just keeps getting colder.  What gives?  The roads, the traffic, the pollution and the weather have taken it out of us. 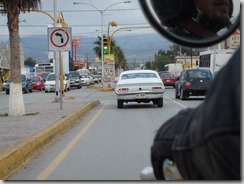 we’re just laughing aloud because we just simply just don’t know what else to do.  We’re riding around Monclova last night, lost as can be, looking for a hotel when we start to laugh uncontrollably.  We have no idea where we are and no idea where we’re going.  We’re cold, tired, and we’ve already had a couple near misses in traffic.  We just want a cheap place to stay.   We just want the day to be over.  Driving a motorbike in Mexico is stressful.

Who knows what’s around the corner, a giant pothole, a goat, a few guys pushing a truck, one of those awesome sections where 3 lanes converge into one and all the lines disappear?  Even a map isn’t much help when navigating Mexican cities.  In order for a map to be useful you would need to have street signs.  These aren’t too common in the places we’ve visited thus far.  But we’re getting along.  We’re learning.  I passed a semi on a two lane road while there was oncoming traffic today.  That’s okay in Mexico.  It’s expected.  I’m getting the hang of these new driving rules.

Tonight brings us to San Rafael.  The end of the day tomorrow should leave us 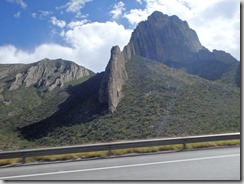 somewhere near San Luis Potosi and out of the more dangerous areas of Northern Mexico.  We’ve had no trouble to speak of thus far.  For the most part, everyone we’ve had contact with has been exceptionally nice and accommodating.  We are certainly an object of interest as we make our way down the highways and through the towns and cities.  On a side note, the vast majority of motorcycles here are less than 200cc and you don’t see them on the highway less on the shoulder on rare occasion doing 35mph.  Apparently, two gringos doing 65mph down the highway on a motorbike is quite a sight. 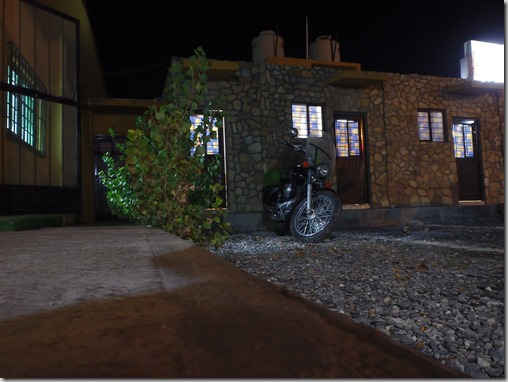 Our $20 hotel in San Rafael.  The room is cold, the bed is hard, there’s no hot water, but we couldn’t be happier to be off of the road with a little time to regroup and get at it again manana.

There is no internet either so when this post finds you it will be a few days outdated.