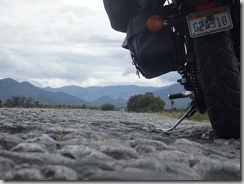 While sitting around in Matehuala, Mexico we kept hearing of an old silver town from the 1700’s in the mountains to the West called Real de Catorce.  After some research the major monkey wrench in our plans was the 20 miles of cobblestone road that lay between our current position and what promised to be one of the better experiences in this part of Mexico.  It can’t be that hard right?  A street cruiser laden with 80 pounds of gear and two people?  Well let me tell you.  It’s no easy feat riding cobblestones for that type of distance.  It’s brutal, but we did it.

Fortunately, the cobblestone road only wound up a mountain pass for the last 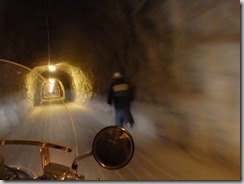 five miles or so, but that was the easy part.  Once you actually make it to the town and through the three kilometer tunnel under a mountain you’re on the outskirts of the Mexican version of 1800’s San Francisco done entirely in non-uniform cobblestones.  It’s as if you shed two centuries in the tunnel.  The streets are borderline impassible by motorcycle.  Keli hopped off and took about finding a hotel as I crept the bike through the pedestrian market 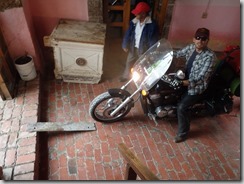 behind her.  It was the closest thing to flat available.  Even the local cop just smiled and shook his head in empathy bemusement at me driving the pedestrian path.  As if the ride over twenty miles of cobblestones, up a mountain pass and through the windy, hilly streets of the market weren’t enough, secure parking for the hotel required the ascent of three stairs by means of a 4’” wide 2’ long piece of steel and the help of a few new found amigos.  Much to my surprise the entire operation was an overwhelming success.  Of course, the whole ordeal must be repeated in reverse in order to leave. 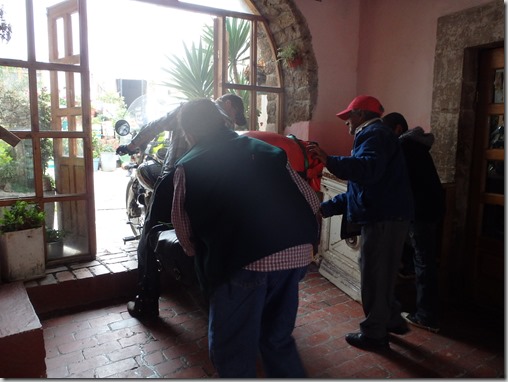 While the town of Real de Catorce already existed, silver was discovered in the 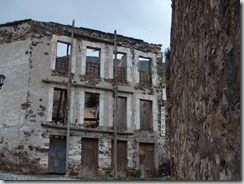 local mountains in 1772.  A few years later, the village was founded in 1779.  By the late 19th century the population of the sleepy mountain town had exploded to more than 15,000.  After the silver crash of the early 20th century the town was all but abandoned.  Today, Real de Catorce derives the majority of it’s income from tourism.  Perched at about 9,000 feet and constructed almost entirely of stone it’s a site to behold.

We’re settled in town.  The hotel is paid up for two 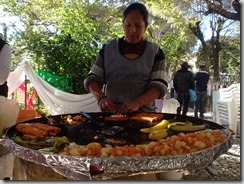 days at a little steeper rate than we had hoped, but for good reason.  It turns out that this weekend is the Revolution / Food festival in Real de Catorce and we’re in luck.  There are good eats from street to street and corner to corner.  I think the vast majority of our diet in Mexico thus far has consisted of street stand food and this is just our cup of tea.  We’re not scared (and both our bellies have been in good health thus far).  For the next two days wander about town partaking in Gorditas, Pasole, 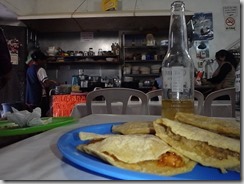 varios breads, Cervesas, tacos, enchiladas, dulce de leche and queso de tuna (this type of tuna is a cactus fruit) and more.  This is the environment that leaves two fearless foodies in heaven.  Speaking of fearless foodies, have I told you about Keli’s chicharones experience in Monclova?  Ah, maybe later.  Suffice it to say she managed to pick up what I believe to be road kill aged several day and cooked on the street side, probably for animal consumption.  I’m pretty sure our dogs would have snubbed their noses at the stuff.

The Fiesta de Revoltioncion consisted of locals in period dress doing reenactments, donkey races, singing, dancing and otherwise carrying on.  The photos do more justice than my description ever would.  Let’s be honest, we only understand a small percentage of what’s going on anyway. 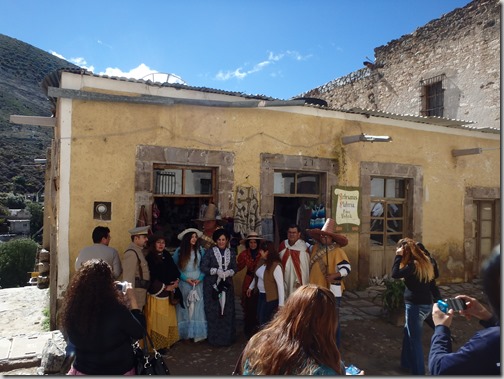 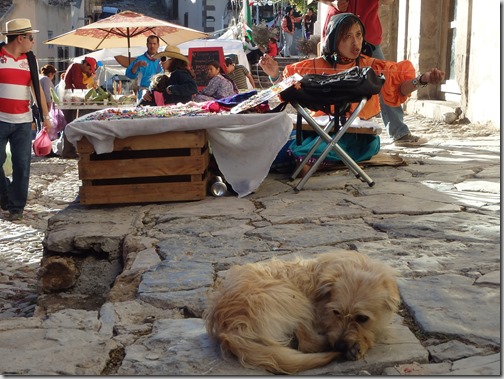 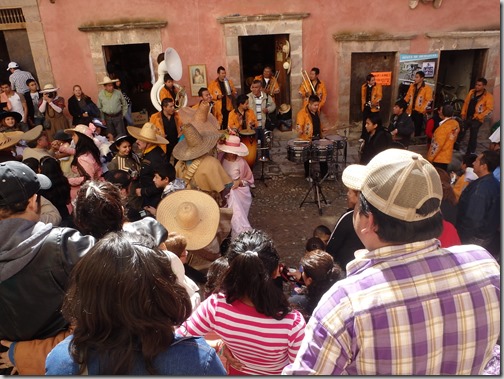 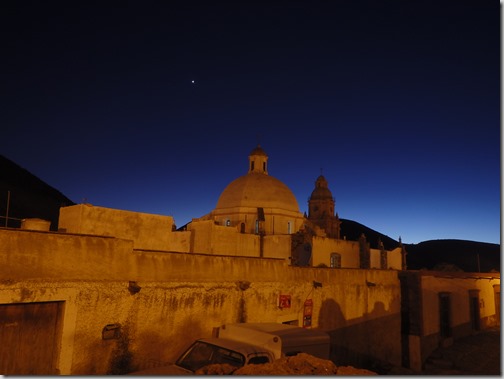 Once again, this town leaves us with no internet access and this post will find you several days later.  Please be sure to visit the image gallery below for more amazing photos.