It must have been under 40 degrees all morning climbing and descending in and out of the clouds.  It’s the moisture that does you in, frozen little fingertips and toes.  A little after noon we dropped off of the lush green mountain tops and back into the high desert headed down 85 South towards Mexico City.

We’ve finally covered more than 100 miles in a single day, which is impossible to do on curvy mountain roads where we’ve been for the last week.  We hit 60 mph!  It’s Thanksgiving and the sun is shining on the Mexican desert.  We’re dodging potholes and livestock and making headway. 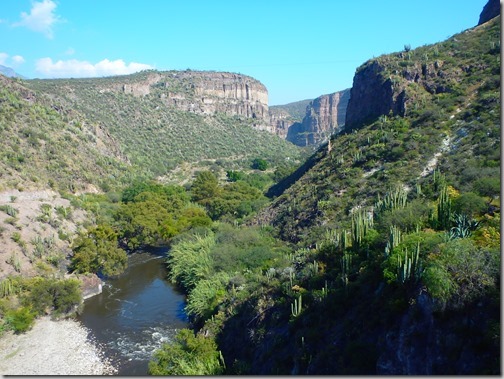 As the sun starts to set and temperatures begin to drop off again we’re on the lookout for a hotel.  The first one we check is closed, at least to us.  We motor on.  3000 miles on the road and we’re tired and wind burnt.  We swing in to the next hotel 20 miles later.   The fun begins. 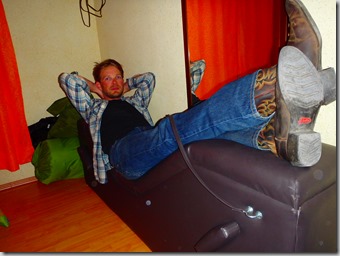 As usual, we check out the room before making any commitments.  Turns out this hotel is Mexican sex hotel.  Maybe the curtain that you park your car behind might have been a clue, or the gaggle of guys so much more interested than usual over our check in.  Nope, didn’t give it away.  It was the photo illustrated instruction manual for use of the special sex couch in the room.  I don’t know that we would have gone for it being thanksgiving and all, but I was able to talk the guys down a third of the price and we figured why not?  How many people are spending their thanksgiving in a Mexican sex hotel?  We are.  This place has everything but a vibrating bed.

There’s nothing else around here less a restaurant and a convenience store.  After thoroughly exploring the amenities of the room, we had worked up an appetite and headed over the restaurant.  Closed, but the convenience store was still open.  As we’re deciding what sort of packaged cookies we’re going to have for thanksgiving supper the clerk offers to make us some chicken and soup.  We agree and sit at a small table in the corner of what would effectively be a 7-11 and enjoy a small portion of chicken and vegetables.  We toast each other with a couple beers from the cooler and are indeed thankful.

We’re 3000 miles from home in the middle of Mexico on Thanksgiving and we truly could not be more thankful for the lives we lead.  Now that’s unconventional.