Just because you don’t know where you are doesn’t necessarily mean you’re lost.  In fact, sometimes it lands you in the best of places.  The qualifications that accidently lead us to the Smokey Mountains were simple:  It has to go South or West and it can’t be a highway.  We used these qualifications to pick a route for two days and it dropped us on the doorstep of one of the most beautiful rides in the East. 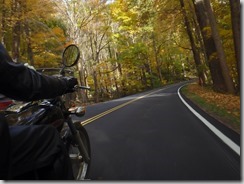 In late October the Smokies are in full bloom.  The high altitudes have dropped, but the majority of the ride on 441 is Autumn’s perfection.  We grabbed a tank of gas and motored out Gatlinburg about 4:00, just in time to catch the evening light filtering into the valley.  It seemed like every motorcyclist in the area that could get a Wednesday afternoon off was on the road.  Mostly Sunny and 70 degrees you couldn’t ask for more.  There is something truly special about the smell and taste of fall as you motor down a curvy mountain road in the open air.  It’s magic. 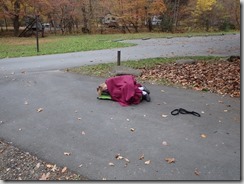 At the far end of 441 is the Park Service campground Smokemont.  For $20 we pitched a tent and had bathroom facilities.  Our first full camping pitch and breakdown of the trip, both ran about 2 hours with meals included.  We hit the road about 10:30 and motored the Cherokee, Nantahala and Chattahoochee National Forests, all in spectacular bloom.   We followed the two lane along the Ocoee and Nantahala Rivers and rolled along into North Georgia where I’m writing from now. 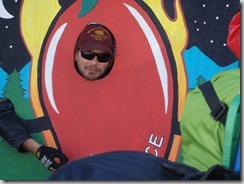 motel.  It looks like the storms should blow through by noon tomorrow and we’ll be back on the road and headed towards Jackson, Mississippi with clear skies for several days.  We’re goin’ to Jackson.  Better turn loose of my coat.

Technical Details:  The bike is running well.  There’s a slight squeal from the front end that is not too worrisome.  We’ll have it checked out at some point.  We’re averaging about 46 mpg and 200 miles per day.  Expenses are a little high, but we should make them up on extended stays south of the border later on.