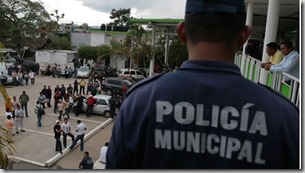 So there we were in Hopelchen, Mexico minding our own business.  We’re just riding our motorcycle around the plaza checking things out when Keli spies an ice cream shop.   I whip into the nearest parking spot and we make for dessert, turned out to be the best ice cream we’ve had in Mexico.  We’re enjoying it in the plaza across the street when we notice the local policeman checking out the bike.  We walk over and realize that we are indeed parked in the taxi zone.  The policeman points us to the motorcycle parking.  I move the bike and he follows us over.  He’s already got my drivers license.

You know what’s going to happen next.  He parks the police truck on a darkly lit area of the street and motions us over.  He explains that I have committed an infraction and he’s going to to have to write me a ticket.  Then again, there’s always that other way.  My Spanish isn’t the best but I’ve traveled enough to know exactly what’s going on.  He even names his price in English, 200 pesos.  I looked at Keli and said ‘”you don’t understand, keep playing dumb.”  She obliged and I as well kept playing dumb.  The poor cop spent the next few minutes trying to figure out how to tell us that we were supposed bribe him, but we just didn’t get it.  In frustration, he finally gave up, handed back my license and returned to his important work.  As soon as he was out of site Keli and I gave a high five over non talking our way out of our first ticket and bribe, but police corruption is alive and well in Hopelchen.

I take great pleasure in foiling that cop.  I’ll take even more pleasure in writing the Office of the Mexican Government Tourism Department.  As I understand, they take a keen interest in this type of thing.  If any of you Googlers would like that address, they accept communications both in English and in Spanish:

Or find them on the web at Secretaria de Turismo