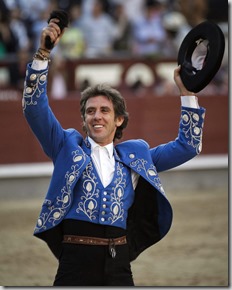 First, it is not the purpose of this blog to be or debate your moral compass.  You certainly don’t want to follow mine.  It gives you all kinds of faulty directions before finally pointing due good.  I’m not here to pass moral judgment on the sport of Bullfighting.  I’m here to bring you the facts and realities of a cultural past time, like them or not.

The fact is that Pablo Hermoso de Mendoza (Spain) is simply the best rejoneador (a bullfighter who fights the bull on horseback) in the World.  This style of bullfighter is far less common than the traditional “on foot” style and employs the efforts of highly trained horses.  Pablo Mendoza trained himself and his horses in secret in Spain for more than 10 years before making his first public appearance. 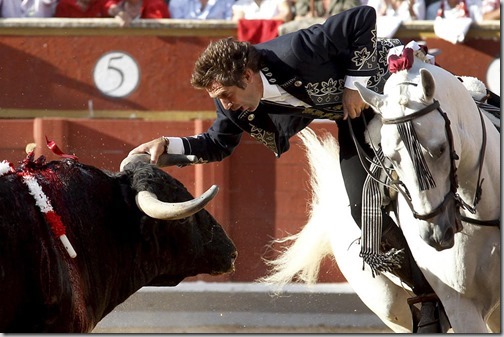 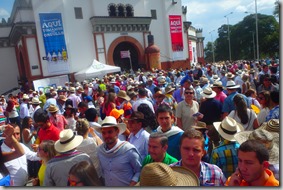 We were all pretty amped up about the whole thing.  This bullfighting match was the grand finale of 10 days of festival in Manizales, Colombia.  People come from all over the country to Manizales just for this event, sometimes making payments to their tickets the entire previous year in advance.  It was indeed a sight to behold.

With some wisdom we decided to head out to the ticket gate the morning before the event and pre-purchased our tickets.  A right good idea as the photo above shows what we found in front of the coliseum just three hours later.  That’s right, I’m going to call it a coliseum.  It’s probably the closest thing that remains on this planet to the spectacles in the great coliseum of Rome.  It’s more commonly known as the Plaza de Toros.

Bullfighting is a spectacle of blood thirst.  People pile into the coliseum 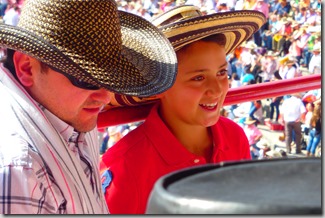 by the thousand to hoot and holler and cheer for the ultimate demise of the bull.  They waive their towels and chant creating such a racket that your whole body vibrates.  There wasn’t an empty seat in the house.  To be honest, I’m not sure how to continue through this article without passing the moral judgment that I swore not to at the very beginning.  It’s get’s a little gruesome in there.  Check out the video of the traditional Matador Julian Lopes “El Juli” below.  Also at the evening show and surprisingly the crowd favorite.

And some better quality video of Pablo Hermoso de Mendoza

You get the idea. 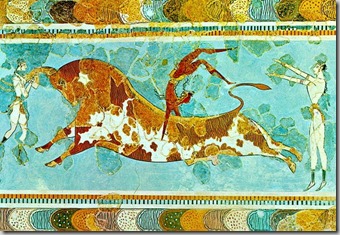 dated to some 2000 BCE.  It shows both male and female contestants grabbing the bull by the horns and leaping over it’s back.  While Bullfights were practiced in ancient Rome, it was on the Iberian Peninsula that they came to develop their form and fame.  Thus saw the rise of the cape men on foot that helped position the bull for the rejoneador.  The modern bullfight is much the same as it has been since the early 18th century.

Six bulls, to be killed by three matadors, are usually required for one afternoon’s corrida and each encounter lasts about 15 minutes. At the appointed time, generally 5 PM, the three matadors, each followed by their assistants, the banderilleros and the picadors, march into the ring to the accompaniment of traditional paso doble (“march rhythm”) music. The matadors (the term toreador, popularized by the French opera Carmen, is erroneous usage) are the stars of the show. They wear a distinctive costume consisting of a silk jacket heavily embroidered in gold, skintight trousers, and a montera (a bicorne hat). A traje de luces (“suit of lights”), as it is known, can cost several thousand pounds; a top matador must have at least six of them a season.

Hemingway and Antonio Ordóñez in Ronda

When a bull first comes into the arena out of the toril, or bull pen gate, the matador greets it with a series of manoeuvres, or passes, with a large cape; these passes are usually verónicas, the basic cape manoeuvre (named after the woman who held out a cloth to Christ on his way to the crucifixion).

The amount of applause the matador receives is based on his proximity to the horns of the bull, his tranquillity in the face of danger and his grace in swinging the cape in front of an infuriated animal weighing more than 460 kg (1,000 lb). The bull instinctively goes for the cloth because it is a large, moving target, not because of its colour; bulls are colour-blind and charge just as readily at the inside of the cape, which is yellow.

instinct and centuries of special breeding. Unlike domestic bulls they do not have to be trained to charge nor are they starved or tortured to make them savage. Those animals selected for the corrida are allowed to live a year longer than those assigned to the slaughterhouse. Bulls to be fought by novilleros (beginners) are supposed to be three years old and those fought by full matadors are supposed to be at least four.

The second part of the corrida consists of the work of the picadors, bearing lances and mounted on horses (padded in compliance with a ruling passed in 1930 and therefore rarely injured). The picadors wear flat-brimmed, beige felt hats called castoreños, silver-embroidered jackets, chamois trousers and steel leg armour. After three lancings or less, depending on the judgment of the president of the corrida for that day, a trumpet blows, and the banderilleros, working on foot, advance to place their banderillas (brightly adorned, barbed sticks) in the bull’s shoulders in order to lower its head for the eventual kill. They wear costumes similar to those of their matadors but their jackets and trousers are embroidered in silver.

After the placing of the banderillas, a trumpet sounds signalling the last phase of the fight. Although the bull has been weakened and slowed it has also become warier during the course of the fight sensing that behind the cape is its true enemy; most gorings occur at this time. The serge cloth of the muleta is draped over the estoque, and the matador begins what is called the faena, the last act of the bullfight. The aficionados (ardent fans) study the matador’s every move, the ballet-like passes practised since childhood. (Most matadors come from bullfighting families and learn their art when very young.) As with every manoeuvre in the ring, the emphasis is on the ability to increase but control the personal danger, maintaining the balance between suicide and mere survival. In other words, the real contest is not between the matador and an animal; it is the matador’s internal struggle.

The basic muleta passes are the trincherazo, generally done with one knee on the ground and at the beginning of the faena; the pase de la firma, simply moving the cloth in front of the bull’s nose while the fighter remains motionless; the manoletina, a pass invented by the great Spanish matador Manolete (Manuel Laureano Rodríguez Sánchez), where the muleta is held behind the body; and the natural, a pass in which danger to the matador is increased by taking the sword out of the muleta, thereby reducing the target size and tempting the bull to charge at the larger object—the bullfighter.

After several minutes spent in making these passes, wherein the matador tries to stimulate the excitement of the crowd by working closer and closer to the horns, the fighter takes the sword and lines up the bull for the kill. The blade must go between the shoulder blades; because the space between them is very small, it is imperative that the front feet of the bull be together as the matador hurtles over the horns. The kill, properly done by aiming straight over the bull’s horns and plunging the sword between its withers into the aorta region, requires discipline, training, and raw courage; for this reason it is known as the “moment of truth”.

So there you have it.  For better or worse, bullfighting has been a part of European culture longer than Christ.  I can’t say I’d be in any hurry to attend another bullfight.  But I will say this:  That Pablo Hermoso is a seriously spectacular horseman.  I’ve never seen anyone do the things with a horse that he can.  It’s quite a show.