You may not know it, but I’ve been working on my Private Pilot license since June.  That’s right boys and girls, freewheelings.com will be taking flight in the not to distant future.  With all of the training, studying and the business I haven’t had time to write about it as much as I’d like.  Things have slowed down a little over the holidays so here goes… 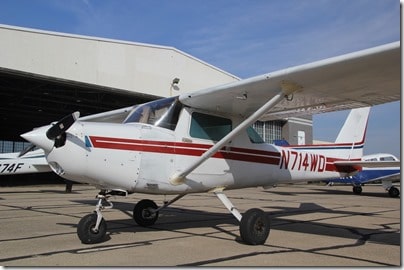 When you endeavor to get your pilots license there are two marked events that you will remember for every subsequent day of your being.  First, your solo flight.  You’ve been training for a couple months at this point and always with your instructor at your side in the cockpit.  As your skills progress, your instructor will eventually sign you off to solo – fly the airplane by yourself.

It’s been a few months ago now since my first solo, but I remember it like it was yesterday.  My instructor pulled me out of ground school one evening.  “Let’s go see if we can get that solo.”  We hopped in trusty ol’ 714WD (the Cessna 152 that I train in – pictured above) and made a few laps around the pattern.  My landings looked decent and the wind was reasonably calm for Ohio.  As we were taxing back to the flight school my instructor looked it me with the most serious look I’ve ever seen on his face and asked:  “Can you fly this thing by yourself?”  I believe my reply was:  Yes, and I can get it safely back on the ground, too.  If that’s what you’re asking.  My instructor says “well, go do it” and hops out of the airplane.

I’m good with the radios and taxiing is second nature at this point.  Everything goes well and I line up 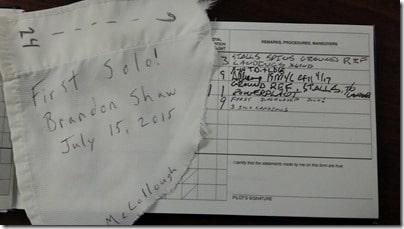 on the runway for takeoff.  I imagine every pilot or wannabe pilot has a moment of reckoning there just before their first solo.  Taking off is the easy part, but what goes up must come down.  That’s all I was thinking as I looked over to confirm that my safety net was, indeed, not sitting beside me.  I took one more slow motion glance at the instruments, put my eyes down the runway, and pushed the throttle to the wall.

Instinct and training takes over at that point.  Three laps around the pattern and three landings later I was officially cleared to solo, but that’s not what this story is about.

This story is about my first cross country solo.  That’s the one where you actually have to go somewhere.  A cross country solo flight is officially defined as a “flight of 150 nautical miles total distance, with full-stop landings at three points, and one segment of the flight consisting of a straight-line distance of more than 50 nautical miles between the takeoff and landing locations.  AND Three takeoffs and three landings to a full stop (with each landing involving a flight in the traffic pattern) at an airport with an operating control tower”

The trip I had planned was from Cuyahoga County Airport (KCGF) to Hagerstown Regional (KHGR) to Bedford County (KHMZ) and back to Cuyahogo (KCGF).  My Dad and Brother were to pick me up on Saturday afternoon.  We’d go whitewater rafting on Sunday and I ‘d fly back Monday. 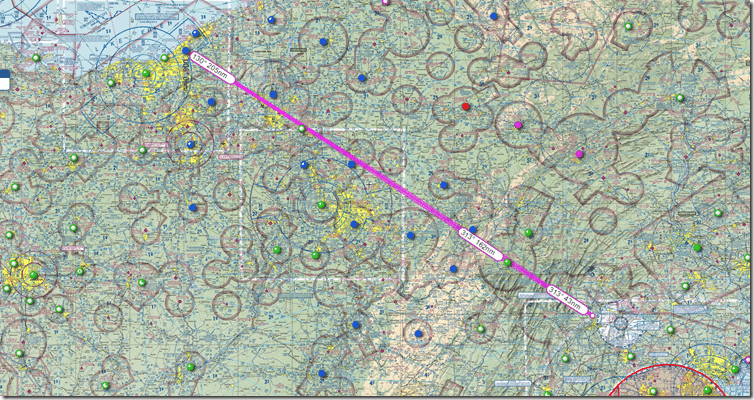 Filled with anticipation I woke up Saturday morning and checked the weather before even having coffee.  It was interesting for a student pilot, to say the least.  There were thunderstorms blowing into Cleveland from the North West forecast to be in the area around 10:30 am.  The Appalachians, which I had to cross, were reporting rain and fog (IFR), but were forecast to clear up around 11:00 am.  Using my novice judgment I decided to head down the the airport, wait around as long as I could, and pull out just ahead of the thunderstorms hoping the mountains would be cleared up by the time I got there. 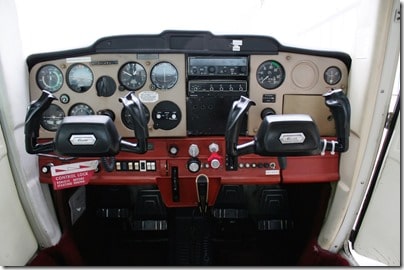 I took off at about 10:00, well ahead of the thunderstorms.  Thanks to the iPad and ForeFlight I was able to keep up with the weather en route.  It looked like the Appalachians were clearing up more slowly than forecast from South to North.  It was apparent that if I stood a chance of a clear crossing it would have to be South of my Current heading.  As soon as I cleared Pittsburgh’s airspace I deviated due South towards Arnold Palmer Regional (KLBE).  Conditions were still VFR (Visual Flight Rules), but deteriorating.  I was pretty close to the first mountain ridge at this point and couldn’t tell what was going on past that ridge.

My plan was to take a look.  When I hit Arnold Palmer Regional I took up a direct course toward Somerset County (2G9).  It’s 23 nautical miles between these two airports and the first, major Appalachian ridge splits the distance.  My thinking was that if things got worse I’d have an airport within a few minutes in either direction.

I made it to Somerset.  Conditions were marginal now, but I was almost out of the tallest peaks and flew on.  Within about 5 minutes it became apparent that that was a terrible idea.  It started to rain and the clouds were closing in on me.  I turned 180 degrees and headed back for Somerset, but things sure looked a lot worse than when I had come through a few minute ago. 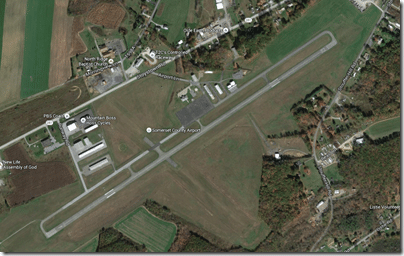 I had to drop down into the valley to stay under the clouds.  I found my fail safe airport and did a fly by to check the wind.  It was perpendicular to the runway at about 9 knots and gusting.  There was a significant grade on the field and I opted for the uphill landing.  It took me two tries to put it down in the wind. I was never happier to be on the ground.  I had survived my first unplanned weather landing.

I parked the plane and strolled into the airport.  I was the only one there besides the airport manager.  I asked if there was someplace to eat around here explaining that it didn’t look like I’d be going anywhere, anytime soon.  He said there was a diner about two miles down the road and asked if I’d like a car.  I say sure and he hands me the keys to an old Suburban out back.  I graciously accept and head off to lunch.  It’s about 11:45 am.

After lunch I spend my time pacing back and forth between the sofa in the airport and the window.  By 3:30 things were looking up, but it was awfully hard to tell what was going on past the ridge. The same ridge that got me into trouble last time.  At four o’clock the manager comes out and advises me that the airport is closing.  I’m welcome to stay the night, but if I leave I’ll have no way to get back in.  He heads out and I contemplate for a few minutes finding it particularly difficult to muster up the gumption to get back in the plane.

Finally, I grab all my things and lock myself out of the airport.  That ought to help me motivate.  About that time an old pilot walks up from the hangers.  We chat for a minute and I explain my situation.  I ask his advice about going back out and he replies “I’m down here.”  I give him the “that’s not the motivational answer I looking for” look.  He says:  “Son, the skies are fine here and there’s no harm in going up there to take a look around.  I’ll tell you what, if you don’t like what you see I’ll give you a ride to town when you get back so you have a place to stay the night.”  That was the motivation I needed.

Now I’m just facing an 11 knot crosswind downhill takeoff and another 11 knot crosswind uphill landing if things don’t work out.  I got this.  I won’t say the takeoff was smooth, but it worked.  When I got up there things looked a heck of a lot better from the sky than they did from the ground.  I flew on to Hagerstown and pulled one of the smoothest landing I’ve done to date. 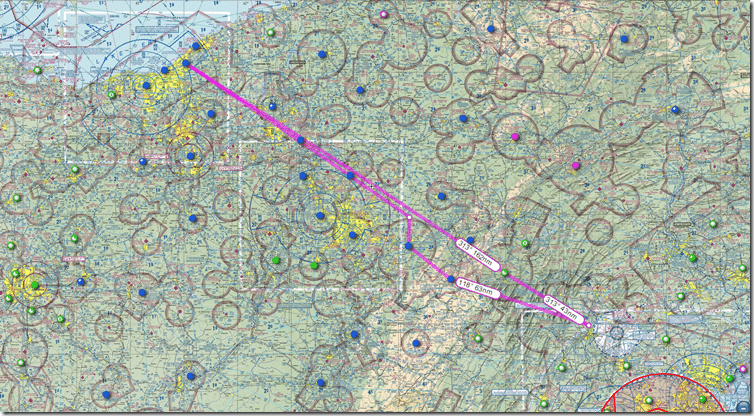 Less some eye opening turbulence, the return trip was uneventful.  I stopped in Bedford to see my Aunt and made the final leg to KCGF without anything in the way of trouble.  I even relaxed enough to take this awesome selfie. 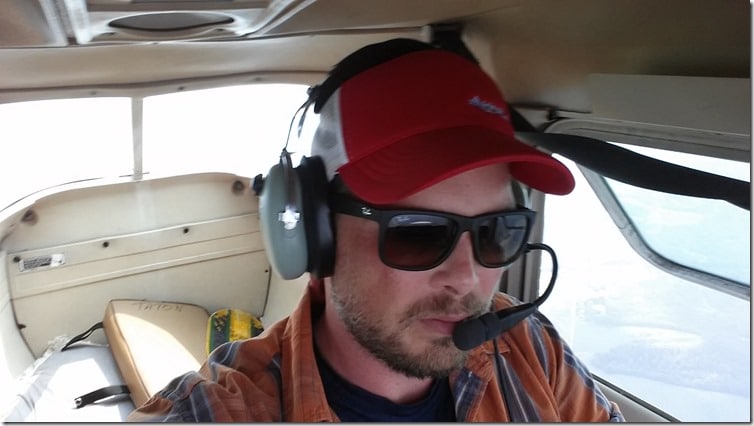 What have I learned from all of this?

Don’t trust the weather man!  I mean, I knew this before, but I’m certainly glad I had a backup plan and made my crossing where I had an out.  I learned that this has to be a necessity in the sky every single time.

There is no backup up there.  The tower or flight service will help you out if they can, but if you put yourself in a bad situation, you have have to own it.  You have to have a backup plan.

Pilots are awesome.  They are a helpful group of people that will do anything they can for you.  I’m sure there are exceptions, but I haven’t found any.