I have officially survived one month here at the kennel and about five weeks in Alaska.  Both my spirits and resolve are intact, and my body is making its way into extraordinary shape.  I’m quite amazed at how quickly I’ve acclimatized to the subzero climate.  I consider five above zero a warm day now and meet the twenty below mornings with vigor, a surprising testament to the tenacity of human flesh.  I’m sure that’s a bit of a shock to those who know me and my endless belly aching about the cold personally.  I suppose it’s a different ball game when cold is something more matter of fact and less transient.  Pierre has arrived from Switzerland to train for the Yukon Quest and my dog mushing crash course has leaped to an accelerated pace.  I’m getting to hit the trails on my own at least every other day now and am running five and six dog teams on a six mile loop.

While everything is bounding back and fourth in its own excitement, novelty, staying just barely within the confines of reasonable and maybe once in a while straying a little beyond the line, it needs to be said that as romantic as it all sounds, working dogs in Alaska is not an easy job.  There are no set hours start to end, few days off, a lot of hard physical work, encroaching Arctic Circle style darkness (we lose six and a half minutes of sun every day) and, of course, the cold.  There are the personality conflicts you have in any job atmosphere and they are complicated by the fact that everyone lives together for better or worse in middle of no goddamn where.  The closest town with a post office is ten miles, the second closest town doesn’t have a road, and it is forty four miles if you’re looking for a proper Internet connection.  But let not this dissuade you, for if your drive is not faltering and you can muster up a heaping helping of stoicism it has all the ingredients for the experience of a lifetime.

My days are simple, unrefined, and I speculate from time to time that Alaska itself may be altogether indifferent to my presence, but the hounds are not, for I am the bringer of meat.  And it is the meat that maketh the hounds happy.  In a certain sense I have replaced hunting for seventy five dogs, invariably the descendants of wolves who themselves hunted.  This evolution, at least in this part of the Country, has taken place rather quickly, 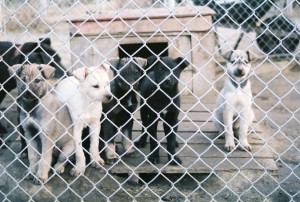 so far as I can tell.   But I don’t actually do the hunting.  It is now the hunters that do the hunting, the butcher that does chopping, and the good folks here at the kennel, namely me, that sort through the scraps, freeze into bags, cook on the stove by way of man’s all magical fire and then serve to the dogs in thoughtfully prepared portions delivered twice daily again, by me.  The thrill of the chase has been ceded to man and his arms even though he earns his catch without staking his own well being and safety against the life of the game he kills, as the dogs would have done.  The wild’s process, the ebb and flow of hunger from the very brink of starvation to the gorged satisfaction of the spring’s first kill has fallen into antiquity.  Make no mistake however, it still exists in the consciousness of these dogs even be it a memory not entirely their own.  They, the sled dogs that is, subsist somewhere between the ones who hunted and the ones who sleep in close to your woodstove every night.  And they are thankful to the bringers of meat each and every morning, each and every evening.

In between dog feedings life on the farm is the usual business of the country, trees that need felling, firewood that needs chopping, the nonstop building of the manor, the cabin, digging footings, nailing shingles, fetching, loading and unloading pickup trucks, feed, hay, screws, nails,  supplies, water, hot cocoa, the list goes on.  The trails don’t break themselves, the dogs don’t break them either and they need the constant attention of the snow machines with their drag plows.  The mammoth wood stove is always hurting for wood.  The horses are all always hungry and thirsty; those damned things eat like horses.  And it’s no small feat to drag a hose seventy five feet to the water tank when it ten below, fill the tank and return the hose to a coil before it’s as stiff as Nixon’s, shoulders.  The dog yard needs cleaning.  The house chores of any house need doing and last but certainly not least the dogs need training.

By now you’re probably asking yourself why I or anyone else would work outside in the dead of winter, in Alaska’s interior for the most pathetically meager wage you can imagine.  Training the dogs, you train them by running them.  It’s been a couple weeks now since my first run and the first snow out here at the end of the globe.  I recall it with the clarity that you always hoped you would recall your lovers face but never did.  It is as you recall the feelings, however (another conversation entirely).  It has it’s similarities to barreling through the curves on a motorbike, that moment that you let go, that you let your mind fall to ease, all the wandering thoughts of the day pass out of consciousness along with the irrelevant sounds.  It is the narrowing of the mind to focus concisely on one task, the matter at hand.   The whispers of the imps and of the angels are silenced, sorrow is gone, fear is gone, and the forlorn circumstances of whatever it were that plagued your mind the moment before its disappearance.   And there you are, alone, the sun ten minutes from out of sight and the moon ten minutes into sight on the opposite horizon.  All the barking of the dog yard and the team as they are harnessed has ceased.  The fighting and bickering between the dogs has ended. They are a team now and they are under your command.  It sounds harsh in some ways but it is very true, dogs under harness can not be as responsible for their own lives as you are.  And all goes quiet, the dull racket and rumble of the sled sliding along with the patter of paws on the snow turns itself from a sound into a vibration that you’re audibly aware of by means of your feet.  Every sense shapes and mangles itself likewise into the next incarnation of what is necessary to have the most precise and exacting knowledge of your carriage and the team pulling it.  For those moments there is no other matter, no other quarrel, no other obligation.  You feel instantly the guidance of the mushers who came before you, those hardened men who braved the wild to bring mail and supplies into the frontier.  Just as the carpenters of old join in spirit when you revive their lost arts the pioneers of the North Country take a vicarious ride upon your rails.  It is that time, participating in a tradition older than most contemporary forms of travel that justifies the meager stipend and the day to day hardships of interior Alaska.  The time on the rails contained in utter peacefulness, guided by forces that are beyond your own capacity to understand.  That is what makes it all worth while.