I’m sitting here this morning starting the preliminary designs of what may be my third timber frame.  I haven’t talked much on this site about timber framing or the timber frame home I’ve been building outside of Taos, New Mexico for the last three years.  It seems as good a time as any time to start.  If you’re wondering what I’m talking about check out the Timber Frame Photo Gallery.

Timber framing has its origins in the Neolithic period with its pinnacle, decline and revival spaced over the last millennia.  To be honest, I don’t quite recall how I stumbled upon the art.  It’s almost as if it came looking for me.  Three winters ago, about this time, I picked up a piece of land on the Taos mesa and set about with the idea to build a house.  The funny thing about building and being a boy is that things always start off easily enough.  Then, you inevitably and uncontrollably want to make things bigger, taller and more complicated.  My little house was born on a bar napkin over beers with my buddy Aulia at Silva’s pub in Bernalillo, New Mexico.    It left the barstool as a simple, humble post and beam octagon.  Today, towering some 18+ feet over the floor stands the completed, timber framed octagon. 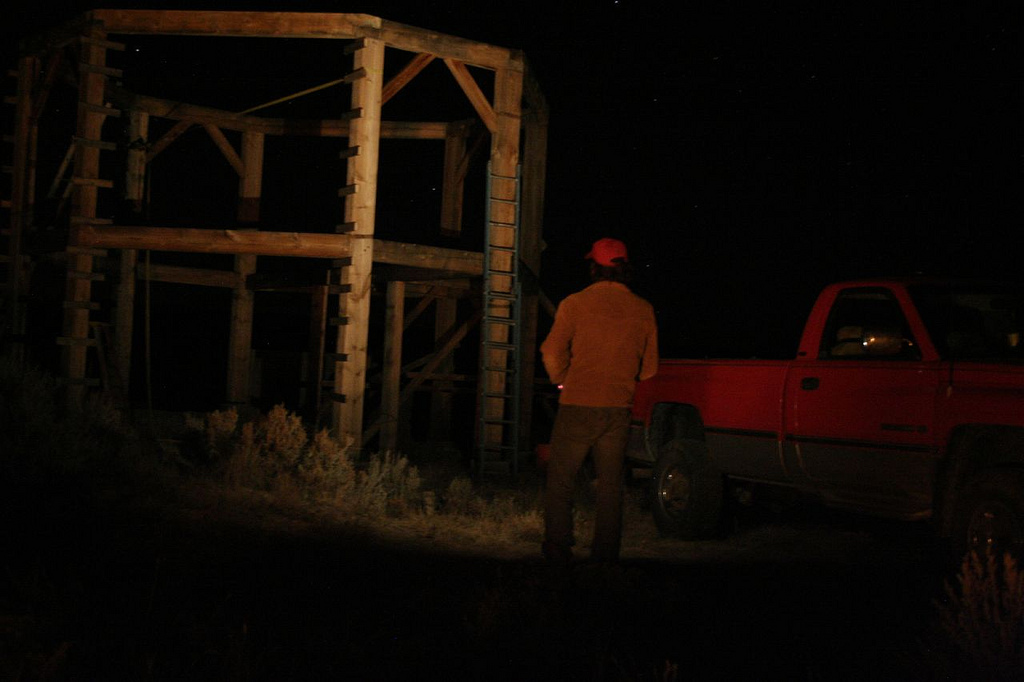 Maybe I was just Googling post and beam construction when timber framing made its first impression on me.  It could have been a dream just the same.  I don’t remember the first time I saw oak pegs sticking out of a knee brace. 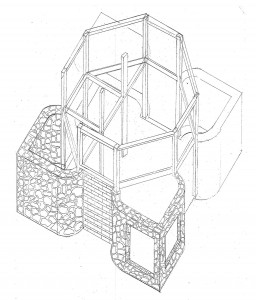 What I do remember is that sudden urge that took me to the library and compelled me to order every book in the New Mexico Library system on timber framing as well as handful more from Amazon to fill in the gaps.  I do remember eating, sleeping and breathing those books for an entire winter holed up in my South Valley casita.  And I remember emerging into the yard come spring sitting under a tree with my draft board and spending afternoons on end drawing, calculating and recalculating.  My fondness of a time honored tradition convinced me to learn the math and make all the calculations and drawings with a pencil and paper.  And there in the yard for every afternoon of the early spring I toiled, contemplated and taught myself how to give the idea upon that bar napkin the timelessness it deserved.

With an idea that had some solidity burned into my mind I set about searching for the timber to make it possible.  Almost immediately I turned up a collection of five, hundred year old Douglas fir timbers from Socorro of all places.  In addition to the timber I also made a friend, an old timber framer, who helped me tremendously with the practical details.  I remember 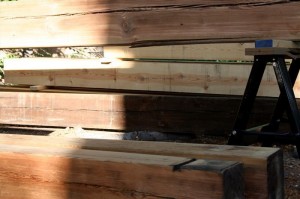 bringing those first timbers home as if it were yesterday.  It hit my like a ton of bricks.  I sat with them for hours still strapped to the top of the pickup in the driveway going through the entire gamut of emotion and back, over and over again.  Everything in the world seemed possible and for once made something like sense.  I was wishing that I had written down my thoughts around that time and then I remembered that I had.  Things look so very different in retrospect and it’s hard to convey the feeling of the time without writing in that time.  Warning!  Philosophical digression coming…  I wrote this just after the first blade hit wood.

“It never ceases to amaze me the enormity of presence man is willing to sacrifice for convenience, which seems to be a relationship not surprisingly askew from that of his freedoms and his safety.  But the die is cast, stamp it out, mark it, preassemble it, slap a shipping label on it, fill the truck with petrol and drive it as far as you bloomin’ can.  I don’t see any other way that we can reasonably assure that the essence of craft or skill are no where contained within the overwhelming abundance of shiny packaging.  Or that we could ever preserve the guarantee that its contents will be as convoluted as its demand.  My generation has been sucked into a cash generating disposable vacuum and no one has yet to figure out just where we are going to put all the rubbish.

My outcome is as much the cause of my dissent as it is its own solution, to create something with which to stifle the canons and the cannons of today’s society, something of substance.  For those of you out wandering the far reaches of the planet that I have not spoken with in some time, my apologies, it is a house in the middle of nowhere that I am building, not an Ark, though I 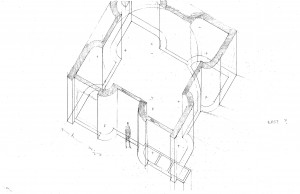 think that would be equally as clever.  But moreover it is an experiment in tradition, in vitality, in disassociation, in the widening of the spirit so much as the mind, so much as the shoulders.  And as of late it has been the cultivation of a more precise association with an ancestral pool of knowledge, or so my linguistic shortcomings should desire to sum it up.  I am building in the methods which my grandfather employed, but in many ways without the tangible guide of those lost artisans who soaked up the sun, ritualistically whiling away the hours with their chisels and their planes and their pride.  Only by means of participation in the same ritual have we, at some level, access to their memories, their guidance and their blessings.  In this moment it is here that I seek my not only answers, but to ask the right questions.

I undertook study a few years ago in the realm of a priori thought, thought before experience, and tried to identify in my own meager means a channel in which to focus my energy.  By and large my experiences in that study yielded some greater, global understanding of the alignment of things, of dimensions, the disintegration of cultural boundaries, time and ego.  But so far as I could perceive they never pointed the way towards the answers consuming any sort of utilitarian purpose, segregated by way of the hands.  The concept settled in my mind over the years and I often called back to it when seeking directional assistance through life’s many follies.  And it was universally invaluable.  However, in recent months I accidentally applied ritual and some natural equation to the same thought process and am seeing it start to embody the revenue I was looking for at its inception.  The road is all but unmaintained.

Getting back to a less transcendental mode of evaluation, I am never-the-less stuck by the minds ability to consume our intellectual and physical experiences and immediately render them viable components of our amassed personality, talent and influence.  It is with great love that I do awake each morning excavating after these elucidations.  And in time I have no doubt they will provide my hand all of the necessary tools.” 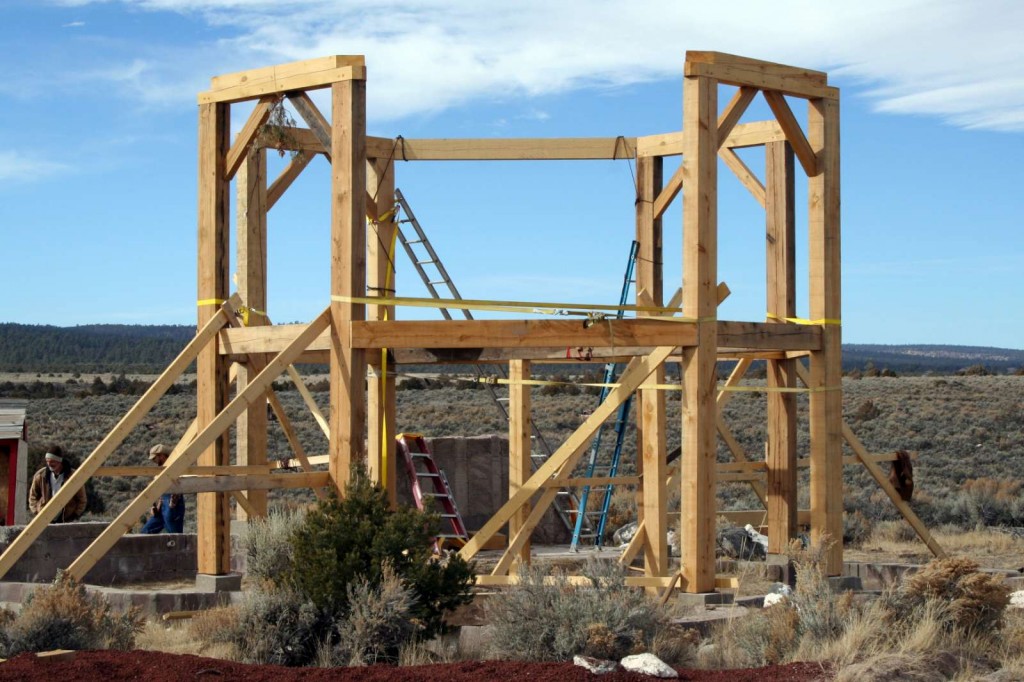 This is just the beginnings of an ongoing project that i’ll be covering for what will likely be years to come.  Don’t forget to subscribe to freewheelings.com.