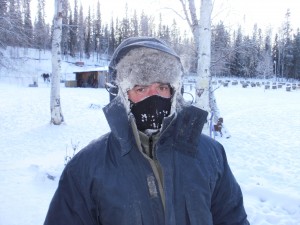 As most of you know I had the pleasure of living with Pierre Heritier, the Swiss musher as he trained for the Yukon Quest 2010.  This race is generally considered to be the world’s most difficult race and the supreme adventure through some of North America’s most difficult country.  As it were, the race commenced on Saturday and from what I can tell of the live tracker, which doesn’t necessarily appear bug free, Pierre started in position 20 and is currently resting at checkpoint number three hovering around position 15.  Now that’s pretty amazing for a Yukon Quest rookie.  From my experiences with Pierre I’d be perfectly happy to tell you he’s one hell of a guy and I know that right now he’s out there in the middle of God’s country and he’s cold, despite be perfectly prepared, he’s hungry, he’s tired and he’s behind fourteen dogs in the middle of nowhere and everything that he has to drink on his sled is probably frozen solid.  And his lips are probably killer chapped, too.  However, he’s got a lot of good people behind him that made his vision possible and yet every single little bit helps.  So, take a moment and follow Pierre through the Yukon Quest while wishing him a heaping helping of good luck.  It’s man vs. the wild out there and you just can’t have too many people nudging the universe in your favor.  You can find Pierre on the Quest’s live tracker and if you want to, you can fly the Yukon Quest trail in a float plane via Google Earth!

Update:  There is some confustion and it appears that Pierre may have lost his GPS unit outside of the first checkpoint and is no longer broadcasting to the maps linked above.  However, the current standings are still available here.