Think of it this way.  Go into your bedroom and imagine it has a small shower, a toilet, a kitchen and a table.  Your bed is replaced with a bunk that’s about 2” shorter than your body.  It has a lip around the edge to keep you from rolling out in the waves.  Everything is a little grimy and damp.  12” portholes are your only view to the outside world and most of what you can see is water anyway.  Now imagine four other guys who aren’t too bright and smell like fish sharing the space with you.  By the way it’s constantly moving, up and down, side to side.  You can wrap your head around that, no?  I could, it was pretty easy to envision hopping on that Salmon Tender.  I have to say though, it was day one that I envisioned, not day 100.

The salmon season in Alaska revolves around what they call ‘openers.’  Parts of the fishing grounds open periodically based on the salmon return as calculated by the Alaska Department of Fish and Game.  The 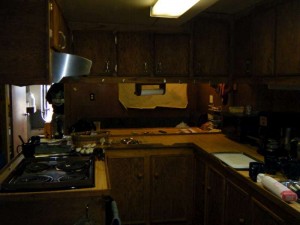 fisherman can only fish during openers which range from 12-72 hours.  The lives of the salmon tender crew thus also revolve around the openers.  What exactly is it that you do on a Salmon Tender?  Well, as we learned in Salmon 101 the Tender buys fish directly from the fisherman, but that’s not all.  They resupply the fisherman with just about anything they could get on land, including but not limited to (note I am making a big, exaggerated wink right now):  Fuel, beer, soda, groceries, ice and fresh water, though all of that is sporadic and secondary to the main purpose of the Salmon Tender, which is buying fish.

All day, most every day, fish is bought, packed and delivered to the dock.  It starts off slowly as the season gets under way with red salmon and 12 hour openings.  Our ride to the fishing grounds is 8 hours in and of itself so the days are pretty lax.  We get up at about 3:30am and supply the fishing boats with ice as they make their way to the grounds.  By 6:00am we’re cooking breakfast and preparing to spend the day doing odd jobs and taking it easy until the grounds close at 4:00pm.  By 5:00pm we see the fast boats on the horizon and starting to make their way in.  In the beginning of the season we’re an hour’s ride from the fishing grounds  (for the fisherman) and each boat makes only one delivery per day.  At this time it’s usually not more than 1-2000lbs per boat, per day.  But it’s mayhem as 30-40 boats close in on you at once, all ready to be unloaded. 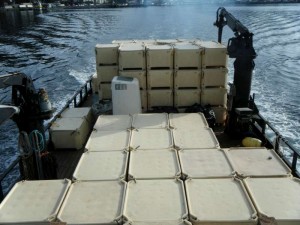 forget we’re on the ocean.  Anything suspended in the air hanging from a line on a boat, on the ocean has the potential to very quickly become a death hazard, especially a thousand pound plastic tote.  We have 30 boats lined up in back of us waiting to be unloaded and they are impatient.  Everything is swinging as fast as it can swing and it gets dangerous on deck.  You always have one eye on what you’re doing and the other eye to the sky checking to see if anything is about to clock you one.  All the boats are cleaned up by about 10:00pm and we have supper and a nap along the 8 hour run back to town.  All of the totes are unloaded on the dock by crane and we turn the boat around for the same thing tomorrow.  These are the easy days of the Salmon Tender.   The worst is yet to come.

Carry On, Fishing in Alaska – Life on a Salmon Tender part 2