Now that everyone has made their way through Salmon 101 you can let your own imagination do the walking.  All those boats filled with all those boys lead to some interesting situations packed with fascinating characters.  From the bright eyed, hot headed new comers to hardened sea farers, cocky young punks and seasoned pros, you get to know them all quickly in the confined quarters of a boat.  This particular story is of my experiences with and the lore of one such character known as none other than Salty Steve.

Before we set out I wanted to say that Salty Steve is a real person and a great guy.  Should he or any of his friends read this I am being careful to point out that this is a fishing story and I didn’t see all parts of it first hand.  Parts of this story were collected word of mouth from other fisherman telling fish stories.  When joking about fishing stories on the boat Salty was always quick to point out that the story itself weighed four pounds.  Like most fishing stories there is truth buried in there somewhere, but once fisherman get to swapping about accounts of an event it becomes a little hazy.  I wanted to share anyway as it’s a lot of fun to see how the lore of fisherman plays out and it’s a huge part of boat life.

Salty Steve is a veteran of the Alaskan waters.  He has some 35 plus years under his belt and his personally has come to represent, or maybe resent, all of them.  He had the quickest tongue on the sea without a doubt.  Always the fastest and the first in line to cut anyone who speaks down to size with a one liner that’ll drop your pants, do a dance and then echo from one end of the boat to the other.  The speed with which he could drop these one liners, consistently, on the mark and with impeccable timing, all day, every day, 20 hours a day was positively fascinating.  It must be the culmination of humor as a defense mechanism after of all those decades at sea in close quarters with boys.  Whatever it was, it was about the funniest contribution to the ongoing banter of a group that I’ve ever witnessed.

Ol’ Salty started out his run with our fleet as skipper of a smaller boat named the Guidance.  The Guidance was a Seiner posing as a tender boat until seining season got under way.  It was also trouble from day one.  The first time I saw the Guidance it pulled up along side of us hoping we would help them fix their stuck booms.  That may not make much sense in the non fishing world, but having no booms on a seiner is sort of like have no axles on a car.  About two weeks after the boom incident the Guidance had another episode in the Cordova harbor where the boat was stuck in reverse.  She narrowly averted damaging several other boats and got the problem sorted out just inches shy of hitting a much larger boat rear on.  The “Guidance” henceforth became known as the “Stuck in Reverse” with Salty Steve at the helm. 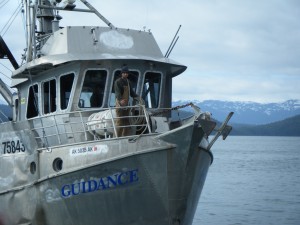 Actually, the problem was not quite sorted out.  About a week passes and we’re all on deck waiting to throw lines to Stuck in Reverse as they’re attempting to tie up to our boat.  They miss the first attempt and swing around for a second except this time they are about 50 yards off with their stern pointed right at us and gaining.  At first we all have a bit of a puzzled look until we hear Salty Steve make the radio call.  “Naknek Spirit, Naknek Spirit (our boat).  Naknek Spirit back.  This is the Guidance.  Please clear the area we are stuck in reverse.  I repeat, please clear the area we are out of control.”  Our boat thunders out of the way narrowly missing a collision while old stuck in reverse spins in full throttle, backwards circles for the better part of a half an hour.

In addition to the mechanical problems Stuck in Reverse experienced during its tender tenure it also had one deckhand who didn’t quite fit the bill.  He was sort of appointed to the boat instead of hired on account of his qualifications or attitude.  To say the very least, everybody on every boat in the fleet disliked the guy and wasn’t too quiet about it including Salty.  One night while Stuck in Reverse was tied up in port for the evening the crew decided to relax aboard with the company of adult beverages.  Salty and the deckhand ultimately found themselves in a screaming match.  The deckhand called Salty a by a derogatory name and, just like that, the old seaman decked the young punk and knocked him clean to the floor.  Stunning and embarrassed the boy gathered himself and went to town, quit and filed charges against Salty.  Realizing what was likely to be happening Steve took the boat back into the Sound so that he wouldn’t be sitting there waiting when the police came.  And the police did come.  For three days a car stayed at the dock waiting for the boat to return and even after the camp broke up there was watch for the boat.  Well, we couldn’t lose a boat captain and Salty was a bit a hero for knocking out the boy everyone disliked.  For the next three weeks we brought him and the rest of his crew all the supplies they needed so they could stay at sea.  It wasn’t until a malfunction of the “autopilot” landed the Stuck in Reverse on a rock in the middle of the night that Salty’s contract ended and he gracefully went ashore where he was arrested and released two days later.  The same day he started work on our boat as the Engineer.

The laughs continued for a couple more weeks with Salty as the engineer of our boat.  I though it should be pointed out, however, that none of the mechanical or legal complications that Steve suffered were really his fault.  Maybe they were just manifestations of his character.  Whatever they were, the situation combined with such a salty disposition made for endless entertainment.  Steve was probably my favorite personality of the sea.  Here’s to you Salty – Wherever you may be. 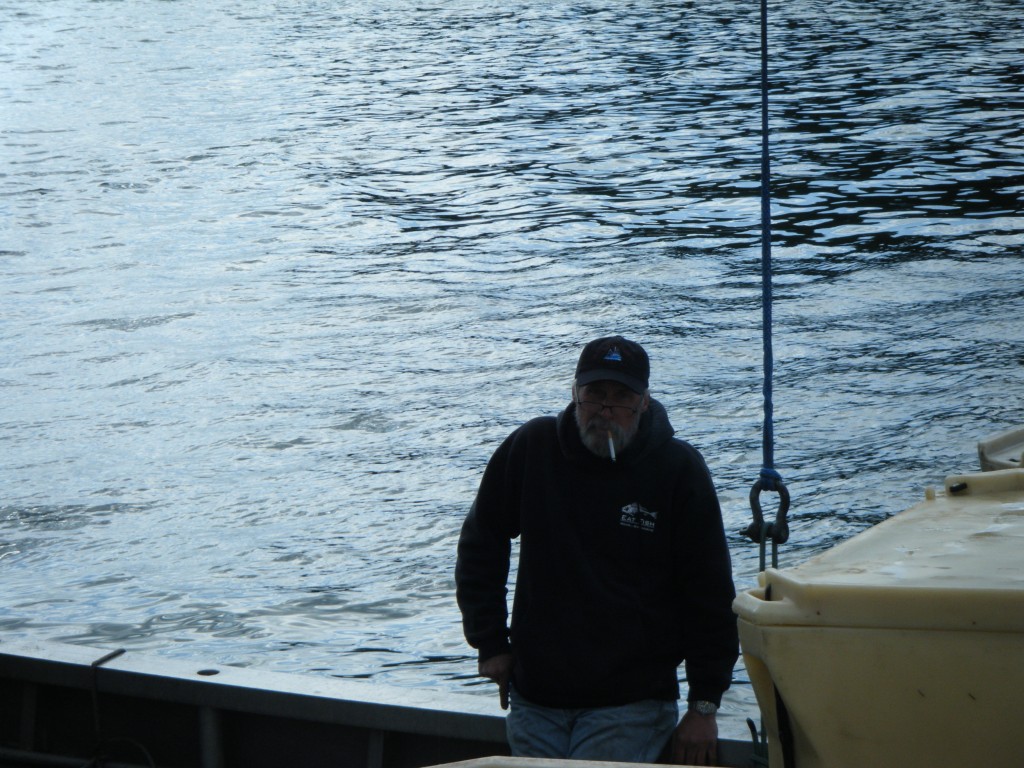