I posted briefly last month about My Favorite Hitchhiker.  I picked Jeremy, the good Frenchman,  up outside of Wasilla, Alaska last fall standing on the

side of the road with a backpack and a sign that simply read “World Tour.”  It’s a little more than six months later and Jeremy and I have been corresponding via email to produce this interview.  As it stands now Jeremy is in Belize, quite a long thumbing way from Alaska in the fall.  Mr. Marie has been on the road for two and a half years now covering more than 60 countries and has utilized the good will and automobiles of others as his only means of transport over land in an uncanny effort “to prove that the planet Earth is mainly occupied by people with good intentions.”  Jeremy Marie is a great guy with wonderful intentions, a true freewheeling spirit and I hope you’ll check out his site and follow his progress on an historic journey:

Thank you Jeremy for doing this interview and more importantly for believing in and being an inspiration for the people of this good world.

What inspired this trip in the first place?

Simply, I would say that traveling led me to travel more. I had the opportunity to start quite young in Europe, hitchhiking all around and I just loved this way of meeting people while moving from one place to another. The next step was for me to travel the whole world. More and more…

What are the top ten reasons people pick up hitch hikers?

It is quite difficult to give ten reasons because I am not sure that there are so many! :)))

In the first place, I would say “curiosity” more than the desire to help. Helping would come for me in second. After that, well, that’s difficult to say, maybe the sense of adventure of the fun side of the driver, who wants to have a good time to talk.

Some drivers also stop to not be alone and to have someone to wake them up if they sleep!

Is there a common thread amongst the people who give you a ride?

Yes, they are all different, and that’s for me a common thread! Everyone has a story to tell, a unique life full of personal experiences. Diversity is a motivation for me to travel and meet people.

What is the worst recurring problem that happens, and how do you learn to deal with it?

For this, I use different ways:

-I use a website called “couchsurfing.org” which is a community of locals who are offering a place to stay for free in their homes. That allows a cultural exchange, possibly all over the world.

-I sleep simply outside, if I don’t find anything. I don’t carry a tent, which may be a problem sometimes.

-I use cheap hostels, less than 5 dollars a night, because of my 7 dollars daily budget.

-I go to knock to the doors, asking for hospitality, if I feel confident in the area.

-And the random situation and meetings, where I often find a solution to my problem by meeting

people in this journey. It can be a driver, someone in the street, in the restaurant…

Are you becoming a more secure or less secure person since traveling
extensively?

I think with the time, I got more experience and I take less stupid risks. In this way, I become more secure, trying mostly to adapt to my environment to look more like a local and avoiding jealousies.

Do you love your homeland above all others, and if so, why?

No, I think there are places I prefer but I will definitely come back, because this is where my family and most of my friends are. France is a nice country for some things but it can be pretty bad also for others.

How do you feel about Americans after traveling in the states?

I am not exceptionally happy after having discovered the country. Indeed, in the amount of people I met, I don’t think that the majority was simply kind-hearted. Comparing to other countries, less people have been fantastic, even if they were really when I was finding them.

The American society is very complicated and many people seem to have difficulties to deal with it. I would say that this is not for me a very socially hospitable place.

Which Country have you found to be the most hospitable?

I can say that some of the Muslim countries are still honoring the custom of hospitality for the traveler. Syria and Sudan have been the perfect example for this. I was constantly invited to share the tea, to have a meal or even a place to stay overnight in those countries.

Has family become more or less important as you travel and have your refined your sense of family?

I think that my family is playing an important role in this journey. They are following me and supporting me in my endeavor, which is very important for me. Having seen many families, I today realize why I have to thank them for the education that they gave to me. Now, I think I will have to give it back to them in a one way or another, but I guess that the fact they know I am happy is also very important for them.

Have you drastically changed your stance on any subject you felt strongly about prior to your travels?

I can’t say I drastically changed my ways of thinking because I mostly don’t remember how naïve I was when I started. I was surely naïve about many things but, as an optimistic, my way of seeing the world is not so different from what I was expecting in the beginning. Indeed, by being friendly with the populations, they are in return friendly with me…

What has been the most unique or intelligent scam tried or pulled off on you?

Hmmm, I think that it’s the one I don’t even know! But I had the chance to not have been so far a victim of a very elaborate trick. That was mostly opportunity thefts, and that was simply my fault.

I had people asking for my passport in Ethiopia, saying that they were policemen in the border, After 20 minutes of me asking for their police card, they finally gave up on me… Which was not so intelligent!

What is your best trick for dealing with a language barrier?

I think that the body language is around 50 percent of the communication. I try to be imaginative in this way! Music and sport are also universal.

How do you fund your travels?

I worked for a year in France as a waiter in a restaurant. I saved up to 10000 Euros and I left with this amount. I have a daily budget of 7 dollars, and I don’t pay for any of the mean of transportation, that’s the challenge! I also got some help from the French Ministry of youth and sport, who gave me 1000 Euros… And, here we go!

Do you have any reservations about the conclusion of your trip and what do you look forward to?

Yes definitely, I would like to use this experience to be myself useful in the things I need important to deal in the future of this planet. I talk about having projects for education, for environment… Raising funds and putting the money in the right place for the right things… And that is a very difficult task, but quite exciting.

What type of shoes do you wear?

After 30 months on the road, I finally realized that I was wearing two kinds of shoes!

One for the road, like hiking shoes, and one for the city, like … city shoes (converse or else). 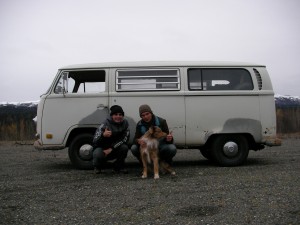