This is freewheelings.com first guest post by Laurel McFadden, enjoy:

As one of the science-types behind the Cordova Biogas project, I’m here to write a little nerd-post about the science that our digestors are based on.  Other than being a great opportunity to try to mitigate some of the energy needs of Alaskans (and northerners everywhere), there’s also some pretty nifty microbiology going on.  Digestor technology has actually been around for years, but this is a totally unique experiment in one method of making the traditional system cold-adapted.

Biogas is a flammable gas made up of about 60% methane (the flammable bit), 35% CO2, and about 5% of other stuff (hydrogen sulfides, etc).  In the wild, when we collect methane from lakes, the relative amount of methane, how old the carbon in that methane is, and what exactly is in that 5% can tell us 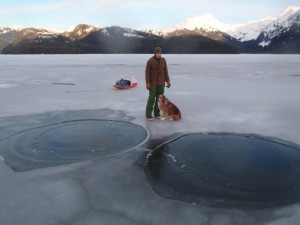 where the gas came from – its either comes from bacteria (more on that in a second) or geothermal origins, like coal beds.  (Barrow, one of the northernmost towns in Alaska, is almost entirely powered by natural gas coming off the coal/oil deposits – if you’ve put 2 and 2 together to associate that with the Prudhoe drilling gig, you know your geology).  That’s natural gas, geologic origins.  But back to biogas.  Biogas is specifically produced from a biological source, namely, methanogens – bacteria that produce methane.

There are a lot of different bacteria that produce methane, and they live in a lot of different places.  One place is in ruminant digestive systems – cow’s guts.  There’s been some media over the years about cattle farms being a significant contributor to global warming: lots of cows, lots of farts, lots of methane getting into the atmosphere.  Although carbon dioxide is usually the poster-child for greenhouse gases, methane actually causes 32 times the greenhouse effect as CO2.  Traditional digestor technologies are based off cow manure.  The manure has two purposes: first, as it exits the cow, it carries along a lot of methanogens; second, the left over grass and food in the manure gives the bacteria something to keep eating, to process into methane. 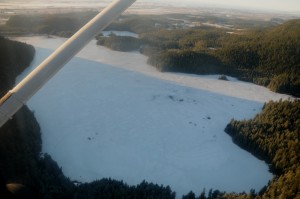 The problem with the methanogens in cows is that they are mesophiles – warm-loving bacteria.  When it gets down to about 15C (60F), they shut down and go in to a sort of hibernation, and ultimately die.  So, in any cold climate – high latitude or high altitude, anywhere with proper winter – the mesophiles in a manure-based digestor will shut down and stop producing methane.  Bad news for trying to keep up an alternative energy source.  But there are other methanogens out there.  Most interesting to our project are psychrophiles, or cold-loving bacteria.  My lab at UAF studies methane seeps in Arctic lakes.  Our focus is in biological methane – biogas.  Our busy season is deep winter, when the ice is thick enough to support coring equipment and when the highest-producing seeps are clearly visible from the melted holes in the ice (water has a hard time freezing when its continually moving from bubbling).  The sediments where the biogas is being produced hover around 1-4C (32-39F) – barely above freezing.  Here our psychrophiles thrive year-round, remaining active and producing methane even in the very cold.

People have tried to make cold-adapted digestors before by insulating their tanks or heating them.  This either only works to a limited extent, or takes so much energy to heat that it totally negates any economic benefit you would get from the biogas output (at least on a household scale).  What’s neat about our project is that we’re changing the fundamental make-up of the methane production – instead of making a big mix of cow manure, we’ve made a big mix of lake mud: psychrophiles instead of mesophiles, using cold-based critters instead of trying to bring warm microbes up to temperature.

We have a couple things to experiment with: two different microbial communities, with different temperature regimes, and probably different palates (picky eaters).  Most methanogens like a fairly specific carbon-nitrogen ratio.  In fact, they are sensitive to a number of environmental conditions: temperature, pH, nutrient ratios, and oxygen – and not only sensitive to ranges within those elements, but also to quick changes.  For example, a single psychrophile may be perfectly happy in 5C or 25C, but if you jump the temperature more than a couple degrees in less than an hour, that can also kill them.  They’re even more sensitive to pH.  Ideally, for healthy biochemical activity, a solution of methanogens (poo slurry) should be about 6-7pH.  As for oxygen: methanogens are anaerobes, or microbes that live without oxygen.  When you start up a digestor, there is a waiting period (roughly 2 days to 3 weeks) before all of the oxygen in the system is eaten by a different host of microbes, at which point the methanogens can begin their work.

How do we keep our zoo happy?  For this project, we’ve designed a two-room system where we keep one set of tanks (one pure mesophiles, one psychrophiles, and one mixed mesos and psychros) at 15C, and one set (same type of 3) at 25C.  One question you might ask: why such a high temperature?  If they can survive down to 0C and 15C, why not just test at those lower temperatures and minimize any heating effort?  As it turns out, experiments done at the Max Planck Institute in Germany (by yours truly) have shown that psychrophiles will indeed produce methane down to almost freezing, but as the temperature increases, their methane output increases nearly exponentially.  Studies have shown a similar pattern in mesophiles, just at higher temperatures.  We need to not just produce biogas – we already know the bacteria do that.  We need to produce biogas at an economically feasible level.  Although biogas digestor technology is relatively inexpensive (something to the order of, roughly, $500/system, depending on your local recycling options) and has a low start-up cost, on a household scale we can optimistically hope to produce about 3 hours of burnable gas a day.  (Math: 1000L(275gal) slurry tank will produce about 1200L biogas per day, allowing an unpressurized burn of up to 3 hours, depending on the appliance).  This will not run an entire household’s energy needs – but it will reduce a household’s fossil fuel needs.  There is a balance, then, to a point at which the technology is not only economically reasonable, but also worth the human-effort trouble of feeding and maintaining.  How much are you willing to give in time and effort to shave down your fuel bill (and save the planet)?  What we need to find, then, is hopefully a median temperature at which methane output is as high as possible, without being unreasonably expensive to heat, and takes minimal effort to maintain.

Maintenance: in simple terms, you have to feed these guys, and clean up their waste (in a manner of speaking).  Luckily, in the case of methanogens, their food is our organic trash – everything you would put into a garbage disposal or compost heap.  And their waste is actually a primo organic fertilizer.  Once a day, a 1000L tank will chew through roughly 1kg of food.  At full bore, that turns into roughly 1200L of biogas.  First thing you might think: cool, I’ll dump in 6kg of food on Sunday and be done for the week.  Unfortunately, just like a porky Fido, one huge meal will cause these guys to literally eat themselves to death: with an overabundance of food, the slurry environment will turn acidic (low pH).  When you start up a digestor system, usually you begin with low food dosages, and watch your pH – a low pH can be balanced up with some baking soda (nice basic agent) to save the microbes, but its better that you figure out a food balance that makes them happy.  Of course, when you pour 2L of food slurry into the tank, you have to let out about 2L of waste water, or eventually the tank just overflows.  That effluent is their waste, and your fertilizer.

As our 6-tank system starts up, we’re taking a variety of chemistry 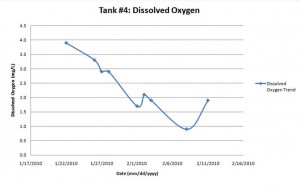 measurements to try to learn more about the microbial environment, and to make sure conditions are comfy.  Mainly, that includes temperature, pH, dissolved oxygen, and oxidation-reduction potential.  Dissolved oxygen and ORP can tell us how soon we might expect gas – whether the tank is turning properly anaerobic.  We’re being careful to keep feeding protocol as consistent as possible, meaning at each dinner time, each tank is fed exactly the same thing: a blended homogenized (super-well mixed) food smoothie (smells like everything you had for dinner.  Really not that bad.).  With small subsamples of that food slurry, we can figure out the carbon-nitrogen ratio of nutrients going into the tanks.

The crux of the experiment, then, comes down to determining the gas output.  As the tank starts chewing, the first positive gas pressure is mostly 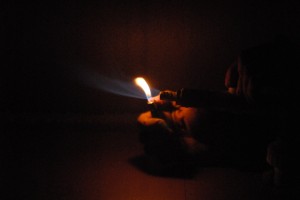 carbon dioxide – not flammable.  Daily flame tests tell us when we’re making biogas: literally, holding a match to the gas output pipe and seeing if it lights into a torch (please don’t try this at home unless you have a flashback arrestor.  If you don’t know what that is, don’t try it.).  But its not just important to know we’re making biogas, we also need to know how much.  To figure that, we have two systems.  The first is a snazzy gas flow meter attached to each tank, which through some complicated technology gives an output reading in volts that can be translated into liters per minute.  The second is an inverted tipping bucket system: gas comes through a hose underwater (in a bucket) and bubbles into an inverted cup on a hinge.  When the cup reaches a certain volume, it tips up to release the bubbles.  On the lip of the cup is a magnet, which upon tipping hits another magnet wired to a datalogger: so, lets say 4 tipping “events” over an hour with a cup calibrated to 250ml – that means you’re making 1L/hour.

So where are we now?  Good news is that for our experiment, we’ve got confirmed flammable biogas production on almost all tanks.  And the coolest thing?  Our psychrophile tanks, at both temperatures, are the most consistent biogas producers.  Whereas some of the other tanks are erratic, the psychrophilic systems are going strong.  We’re still in the beginning stages, taking lots of data, but the most encouraging thing is seeing a brand-new system of microbial workhorses thriving.   That’s science! 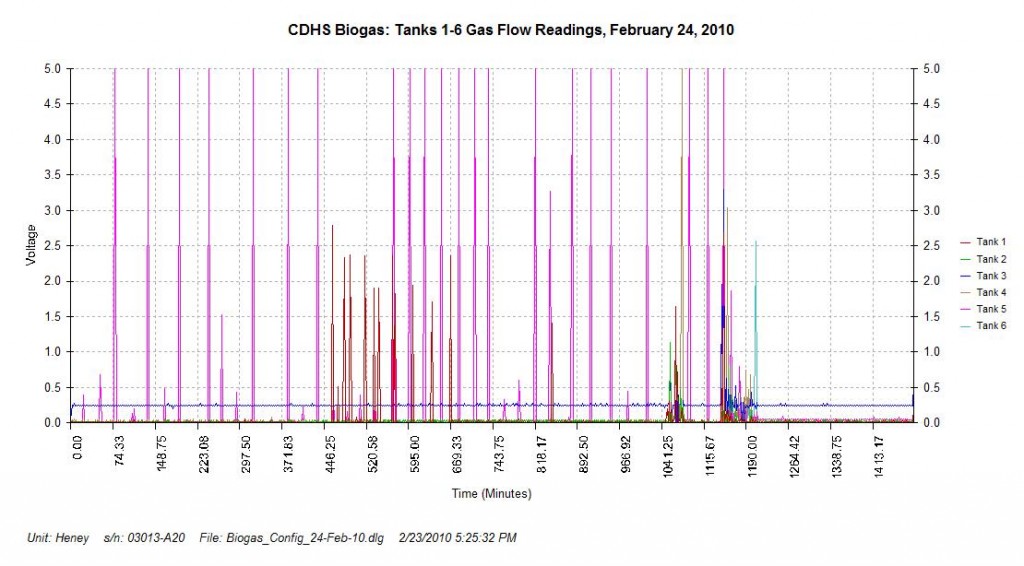