Greeting folks, I am in Cordova, Alaska working on a collaborative project between the University of Alaska, Fairbanks, the Cordova Electric Cooperative, the Cordova Energy Center, The Cordova High School Science Club and Solar Cities building biogas digesters. The project is an experiment under grants from the Denali Commission and National Geographic to test the feasibility of controlled methane production in Northern Climates using psychrophilic matter from Alaska’s lakes.

To start with, biogas digesters are becoming a viable, safe and clean means of generating methane in warmer climates using manure, water and other biodegradable matter as food.  The problem inherent in these systems is that once the temperature drops below about 20 Celsius the mesophiles (an organism that grows best in moderate temperature, neither too hot nor too cold, typically between 15 and 40 °C) that are generally used in this sort of system start to die off and gas production stops.  You can, of course, heat the digesters in order to overcome the temperature constraints, 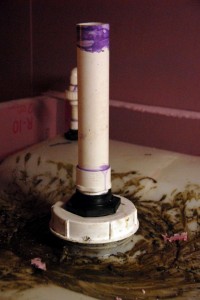 but the energy required to do so eat too large a portion of your gross output to be practical in most cases.  That’s where Alaska’s lakes come in.  Biogas is naturally being generated in lakes all across the state and the psychrophiles (extremophilic organisms that are capable of growth and reproduction in cold temperatures) are able to continue generating biogas down to just 1 degree Celsius.  The hypothesis is that by introducing psychrophiles into the environment gas production could be sustained down to the freezing mark and potentially has a resounding effect on usable gas output for cold climate installations.

Inside, the 40 foot steel Conex shipping container has been insulated on all surfaces with two inch insulation board, dashing pink was the selected color.  A wall has been installed in the middle of the container with a door in order to 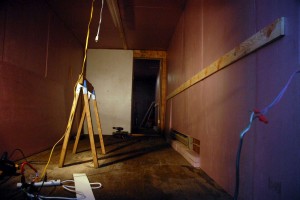 The Science Behind Biogas Digestors