This part three of my Fishing in Alaska series and if you’ve yet to check out part one and part two it might be a good place to start. 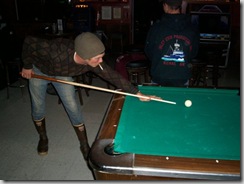 pinks come in full force.  Our boat ties up at the dock in Seward, Alaska.  The crew get to spend some time on shore and have some much needed R&R.  We do odd jobs around the boat during the day and frequent the local watering holes in the evening.  It was sunny three days that week.  I cherished every one of them.

All good things must come to an end and inevitably we get the call to return to Whittier and load up the fish pumping equipment.  Our days of packing fish into totes are over.  Our days of swinging fish bags from bow pickers are on hold.  We steam back to Whittier, Alaska and load up.

The fish pump is a complex machine made up of an enormous pump, a 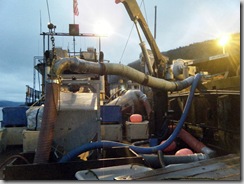 dewatering box, a slide, a weigh box and what seems like 600 miles of tubing.  We’ve moved from unloading bow pickers to pumping directly from the fish holds of Seiners.  It now takes us about an hour to unload a boat instead of 12-20 minutes and we’re moving 10-60,000 lbs of salmon per delivery instead of 3-5,000.  We’re pumping from the fish hold of the Seiners directly into the fish hold of our salmon tender.  The two holds are towards the stern of the ship each with a capacity of 100,000 lbs: 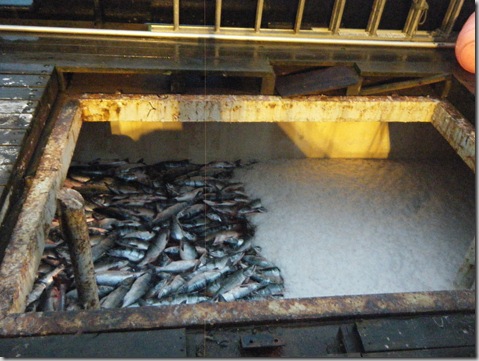 The days are a little easier now, we can fill up our hold quickly with large deliveries and the hard manual labor is for the most part over.  The fish pump is the worker  now.  There’s no more ice to be shoveled, no more totes to move around the deck.  All we have to do is keep the fish pumping monster in operational order.

Here’s video of me (in the orange) moving the fish along the slide:

You can see to the right in the video still a seiner tied up along side us.  The hose you see over the railing sucks the fish into the cylindrical pump it is attached to.  The pump works in cycles, one cycle in, one cycle out.  The salmon leave the pump, the water is separated by the dewatering box and down the chute they go.  If you look almost dead center you’ll see the scale attached to the internal box that weighs them and then it’s off to our fish hold like so:

And so goes the last peek of the salmon season.  As the pink run ebbs the work becomes less and the rest becomes more.  You have time to think about what it’s going to be like off the boat after three long months.

This post is going to be followed up with two more in the series, one on salmon tender cuisine and another on the people and personalities that make the season.

Thanks for following freewheelings and don’t forget to subscribe.