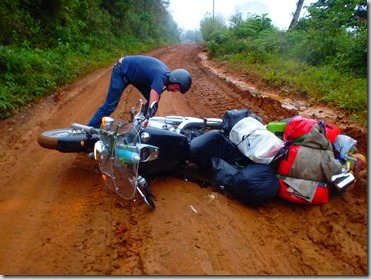 We are fine.  We actually don’t even have a bruise or scrape between the two of us to show for it.  The same cannot be said of the motorcycle.  As I mentioned in my last post Spanglish Me, we embarked on the journey over 90 miles of dirt from El Estor to Lanquin, Guatemala.  I think we had a bit of ‘lost in translation’ when we asked the locals about the conditions of the road.  I think they thought we meant the main road into Lanquin, not the one that went over the mountain range and was little more than a 4×4 trail.

We’re now on day three of our 90 mile trip to Lanquin.  It started out nicely 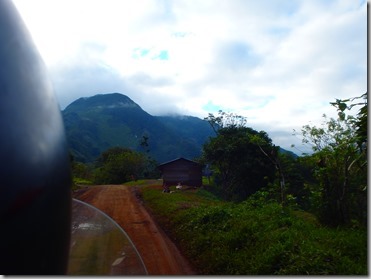 enough, a completely doable, dry, flat dirt road by the river.  She took a hard right and into the foothills we went.  Another 10 miles and we  hit the first of the serious mountains.  It was sketchy, but it was dry.  Dry makes a huge difference on a 650 pound cruiser with street tires and a 390 pound payload.  Mix wet with clay and you’ve real trouble on your hands.  That’s exactly what we found when we crossed the first peak. 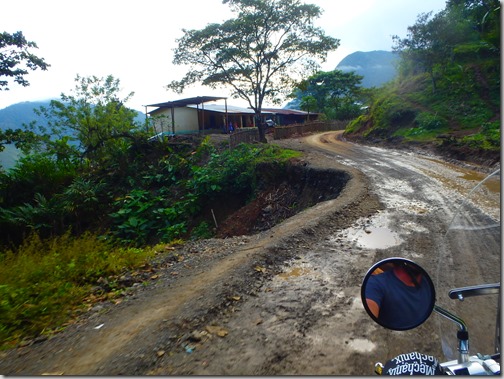 And after crossing the first hump things get worse 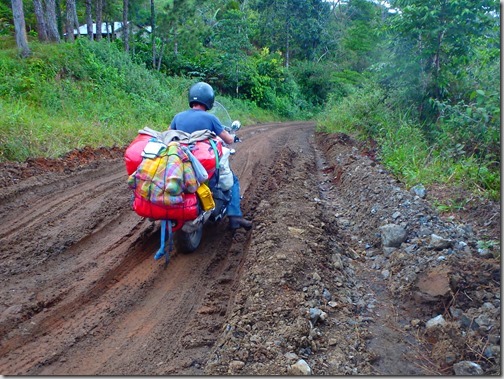 And worse.  We manage a few miles of this but as the clay content increases, the roads get slicker and slicker as our tires become caked in the sticky clay. 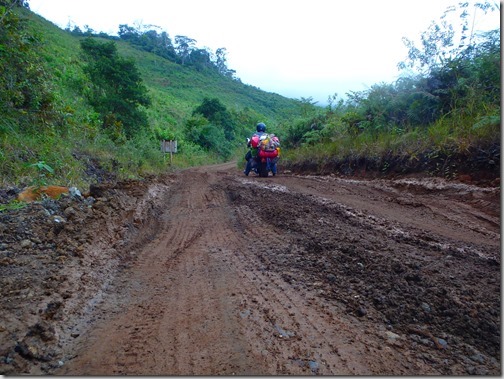 We still have 55 miles ahead of us and I know it’s just a matter of time. 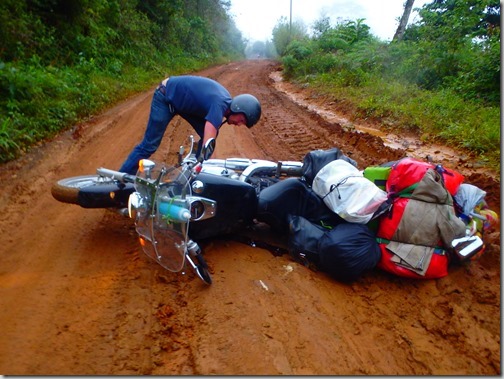 Before this happens.  If you look closely in the photo you can see the white scrape across the one exposed rock in the road that caused all the damage to the bike.  You can also see the pool of oil forming beneath. 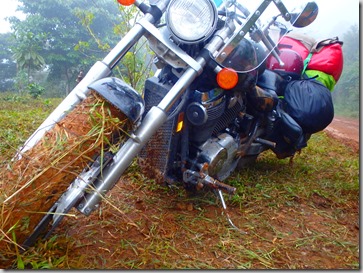 Okay, quick assessment, we are fine, a little muddy.  The bike is on the ground and I see a large puddle of oil forming around it.  At the moment, I was not particularly pleased with Keli taking time out for a photo shoot instead of helping me stand the bike back up to try to save the oil, but now I’m happy to have the photo.  We must have been quite a sight, two white folks on the side of a mountain in the middle of nowhere, Guatemala slipping and sliding in the mud trying to get the bike upright.  I think we finally got it on the third try. 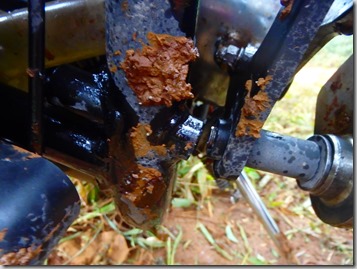 The shifter and mounts were mangled, but I was able to kick them back into place enough to get the bike in 1st gear.  We also got it up in time to save enough oil to restart it, but there is now a hole in the crankcase cover from which oil is spewing with the engine in a on configuration.  Off of the road was all she had in her at the moment. 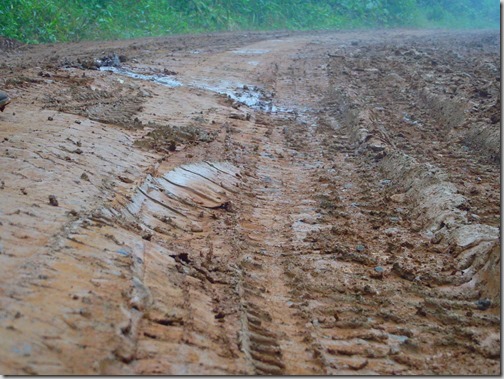 Returning to the scene of the crime.  You can see what happened here.  The right is mucky, the left is mucky, but the middle has a little gravel still visible.  The rear tire with some 600 lbs on it found a little slope and took off.  You can’t make any quick maneuvers, the best you can do is angle it slightly in the direction you want to go and hope traction holds out.  Finally, it did not.  You can see there is some distance between where the slide started and the puddle of oil on the road. 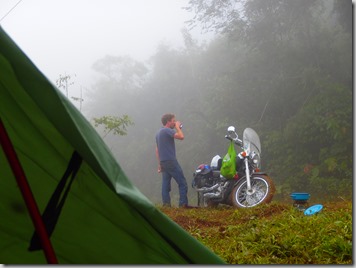 Where does that leave us?  Well, tired and hungry on an impassable road in either direction on the side of some mountain in Semuc Champey, Guatemala with a bike spewing oil that only has first gear (kind of).  Oh, but the fun has just begun.  It’s pushing 5:00 at this point so we do what we can do, pitch camp.  We’re quite the curiosity to the locals heading back to the village for the evening. 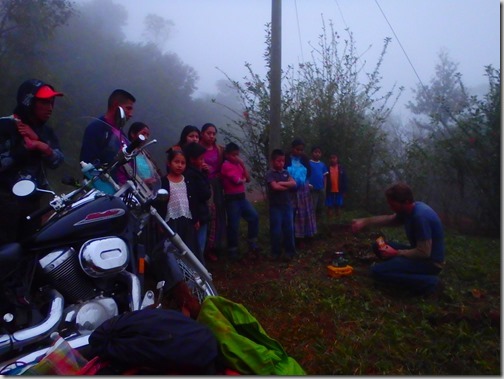 We quickly realize that most of the villagers don’t speak Spanish, but some Maya dialect.  The sure do love to gather round and watch us.  The good news is that there’s a village nearby, which, if we can get the bike there, drastically improves our chances of finding a solution to our problems. 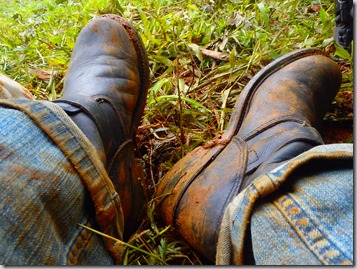 Our problems are as follows.  The shifter and most accompanying pieces are dangling from the bike and oil shoots out of the crankcase when you start the engine.  No big deal.  We Have Gorilla Glue and Cam Straps.  We’re also pretty dirty at this point, but there’s no short term solution to that. 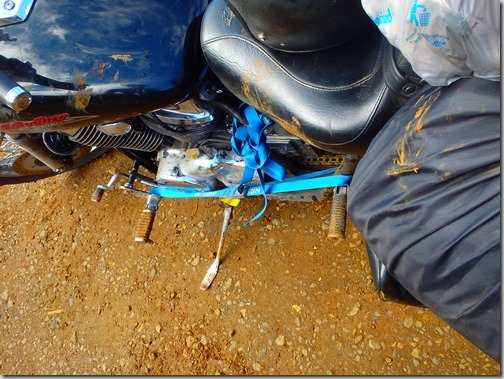 During the evening I patch the crankcase with Gorilla Glue and a 1” piece of cam strap.  I bend the shifter into the the best possible position and reinforce it with a cam strap.  Our good spirits seem to be the only thing that doesn’t need reinforced with cam straps at the moment.  We smile all evening at our situation, have some good hearty laughs, drink some tea and turn in.  With any good luck my patches will get us to the village in the morning.