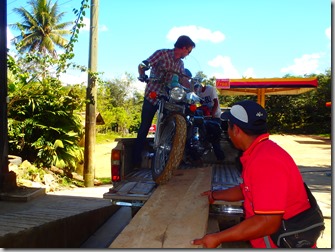 I’m sure you recall the great Guatemala motorcycle wreck of ‘14.  After getting the bike fixed in Cahabon we took off the morning of the fifth day on the final leg of our 80 mile trip to Lanquin, Guatemala.  Upon arriving at the end of the pavement on the edge of town we take one look at the road heading out the other side and decided that it’s just not worth it.  After an hour harassing people with pickup trucks at the gas station we were able to talk someone into giving us a ride, for the right price.

By late afternoon we finally made it to Lanquin, backpacker heaven.  I’m enthusiastic, we haven’t had a decent meal or a hot shower for a while.  All we have to do is one more sketchy unload the bike from a truck scene.  And this is probably the least sketchy of all loads and unloads.

We check into El Retiro, a hostel and hotel situated on the banks of the Cahabon River.  A day of R&R treats us well and we’re off to adventure. 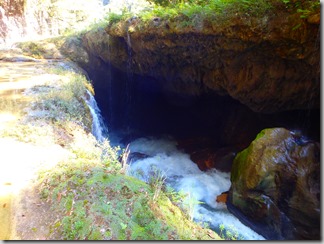 Geologically this is a very interesting spot.  At some point a landslide or boulder slide occurred into the limestone river bed.  The boulders caused water pressure against existing fissures in the limestone, which over time eroded away into a cave.  That would be the cave that the river now disappears into.  The result is that the original limestone river bed is now a natural bridge for some 300 meters spanning where the river enters and exits the ground.  On top of the bridge is a pool drop ecosystem of perfectly clear waterfalls and swimming holes stepped back down to the river’s exit.  I’m no geologist, but that’s pretty neat.  Check out this cool info graphic: 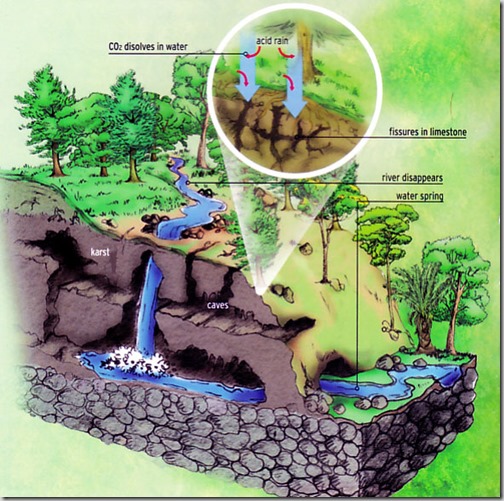 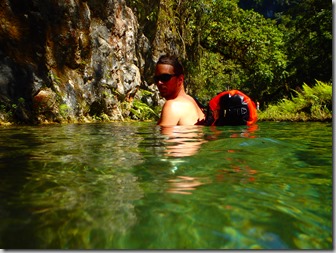 It’s 10 Kilometers or 6 miles of severely mountainous roads from Lanquin to Semuc Champey.  Shuttles run in the mornings and the afternoons primarily from the local hotels, but also from town.  We set out intending to just hitch a ride with a shuttle along the way, but after a few miles it became our mission to make the hike.  Being on the backpackers trail again I was feeling a little put off by the endless shuttling of tourists from one destination to the next.  We were the only tourists we saw making the hike that morning.  Hiking down a mountain trail with a dry bag slung over my shoulder, wearing flip flops and swim trunks, waiving at tourists passing on the shuttles will always make me feel a little better. 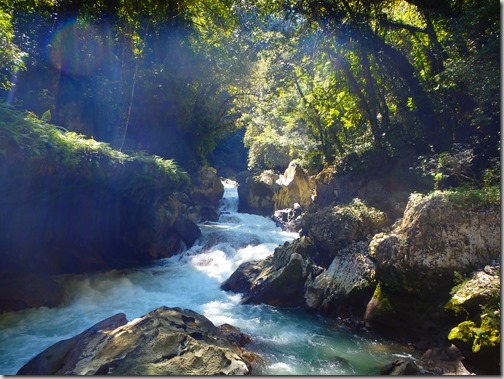 After 3 hours hiking in we’re ready for a swim, but while we’re still moving we head all the way to the top to check out where the water enters the cave.  This is just up stream.  No, it’s not runnable.  It goes into a cave.

We started at the left and worked our way down stream to the ledge just before the waterfall on the right. 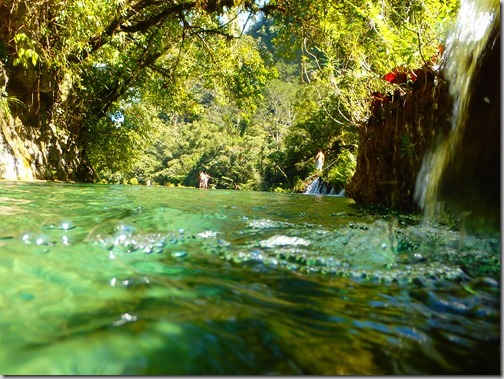 Each ledge makes for a small waterfall into the next pool.  The ledges are anywhere from 1’ to over 10’.  In most cases the pool below is deep enough to dive into. 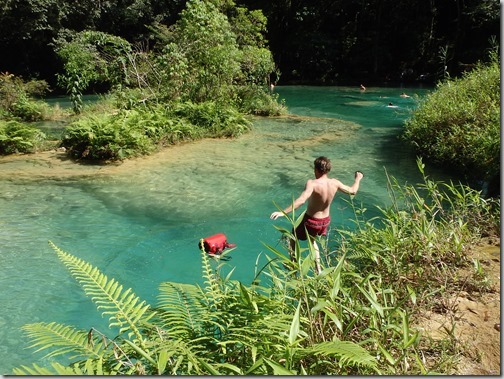 The limestone gets pretty slick with the little bits of mud and sediment that build up on top. 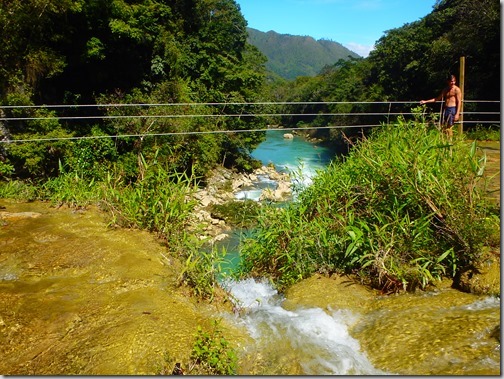 At the end of the natural bridge is a good 40 foot waterfall where the water from the pools rejoins the water emerging from the cave beneath. 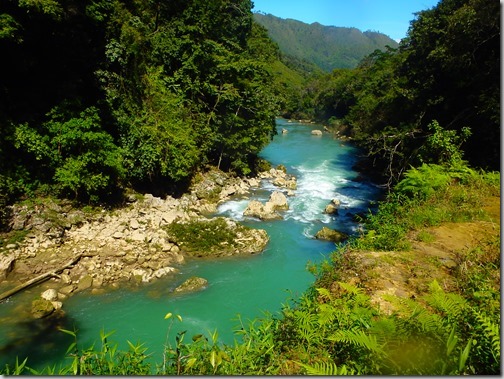 It all winds up in a solid class III and on down the river it goes. 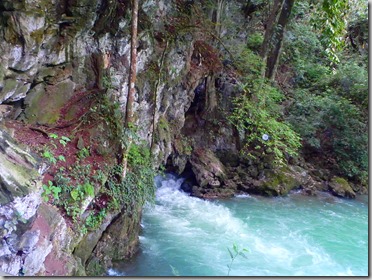 The caves in Lanquin also have a river running beneath them.  It seems to be a common theme around here.  Beautiful, blue-turquoise river drops into cave – Amazing things happen above.  As explained by our Australian-Geologist-Caver-Guide-Friend Anna Marie, the river beneath was responsible for the creation of the caves, much like in the info graphic above. 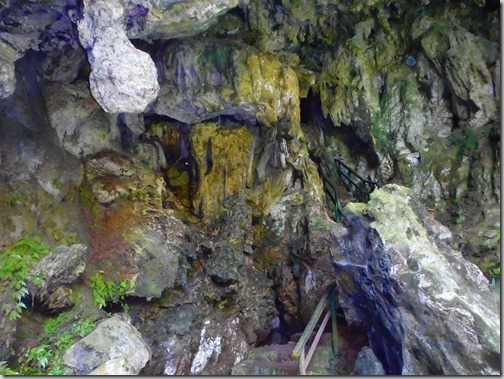 At the entrance it’s easiest to see the water played here. 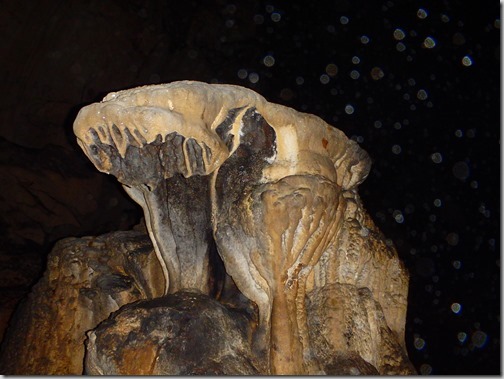 There’s so much moisture in the air all of the photos come out with spots. 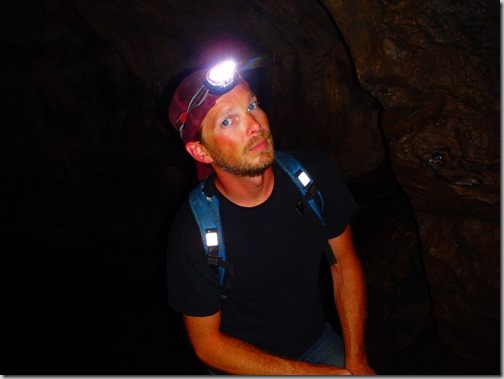 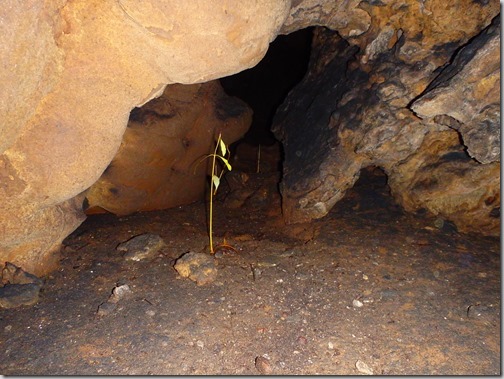 Life, what a magical thing.  This little guy is trying so hard.  Talk about everything getting its piece of the tourist action.  This little fellow is making it on headlamps alone. 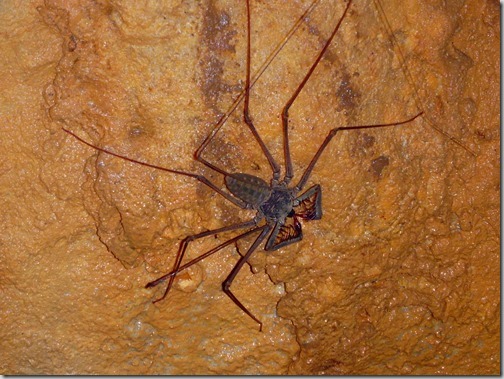 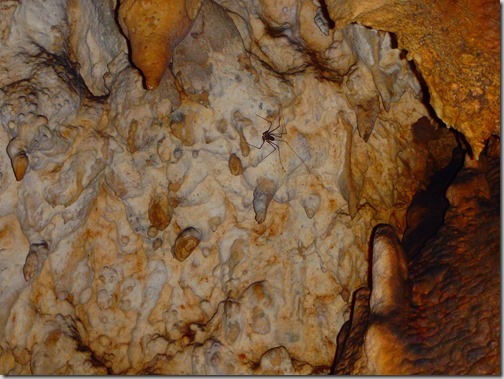 He was about 8” across.  Yikes.  We heard they are not poisonous.  I imagine they wouldn’t need to be.  This thing could take on a squirrel. 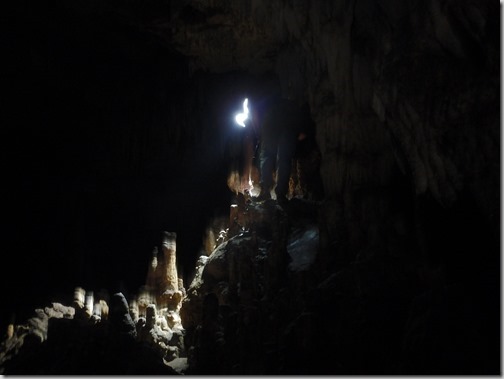 It’s interesting that when you turn off all the lights you can still see your hand in front of your face, but only because your brain knows it should be there. 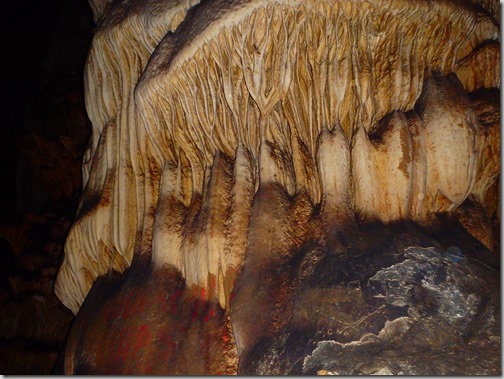 These are shawls.  I ain’t scared of no bat, but apparently that’s the main attraction here. 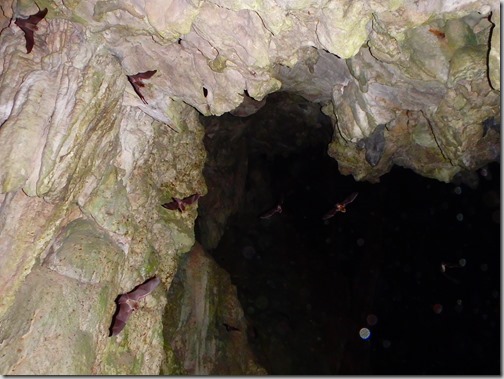 At dusk, thousands of bats exit the cave right above your head.  Now these fools not wearing hats are the crazy ones.  I’ve got my hat, essential bat safety gear.